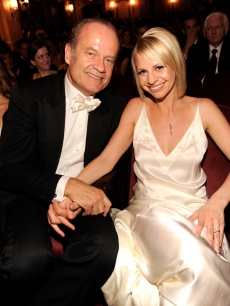 Kelsey Grammer says he would like to have another child.

Grammer told reporters at the Tony Awards that he has discussed the decision with  his children. “‘They’re very, very cool about it,’ Grammer told. Apparently, his son Jude is more exact than anyone: ‘My son, Jude, especially, he’s like, “When are the children coming?” ‘

Grammer recently divorced his wife Camille Grammer and remarried Kayte Walsh who is 29-years-old. ‘[It’s] like it’s never happened before,’ the actor said to reporters about his marriage.
Continue Reading