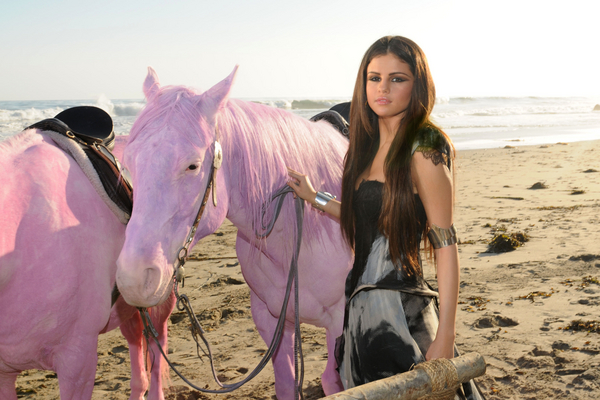 Selena Gomez was spotted on Malibu beach shooting her latest video for “Love You Like a Love Song.” Surprisingly it wasn’t Gomez who stole the attention on set, but her four-legged costar. In the video, Selena appears with a large pink-painted horse, and it has made animal right advocates, including PETA, go crazy.

A rep for PETA said, “There are no safe ways to paint a live horse or any animal; they can have painful allergic reactions to chemicals and there’s no way to know how an individual animal will react. Also, subjecting skittish animals like horses to extended periods of restraint and spraying is stressful and frightening.”

Selena’s crew responded to the protests from such advocates by saying that the pink substance used for dying the horses was “non toxic, vegetable based powder paint.” Even after this cover-up, PETA supporters weren’t silence. The pop-diva and PETA supporter Pink tweeted, “If there are any animal activists around Malibu- at Leo Cabrillo State Beach, there are horses being painted for a stupid music video. Shame … Artists should be more aware and responsible for their actions.”

The release date for the video is not yet set in stone, but it will be interesting to see whether or not it will feature the pretty-pink horse. Can we just say that beside the despite, Selena looked absolutely stunning?