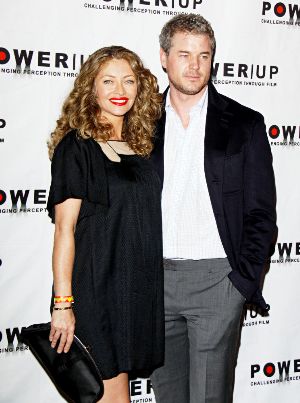 Eric Dane and his wife Rebecca Gayheart had a baby girl named Billie 14 months ago. Since then, Dane claims to be “a hundred times” more in love with Rebecca. He said, “I don’t know if there’s any change more significant that a human being can make than that of a woman becoming a mother. There’s no change more dramatic. You know, I’m a hundred times more attracted to her now and I love her exponentially more than I did before. It’s just great to see her be a mother.”

Eric also loves spending time with Billie, and often takes her to the park. He told People, “I like watching her laugh. Seeing this kid laugh when you put her on the swing, or slide down the slide with her, it’s just. She owns me.”

Supposedly, all is not all happy and loving in the Dane/Gayheart household. One of the family memebers gets jealous of the attention the baby girl is recieving: the dog! Nellie the Chihuahua, the families household pet, feels deprived of the parents attention. Eric said, “The second we brought Billie home she elected herself the Buckingham Palace guard. When Rebecca was feeding Billie, she would sit under Rebecca’s feet. Any time anyone got near Billie, even if it was me, the dog would just start barking.”

Well other than the dog’s jealousy, the family seems to be getting along better than ever since the baby girl’s birth!

The Biggest Loser Trainer Jillian Michaels To Be A Mommy