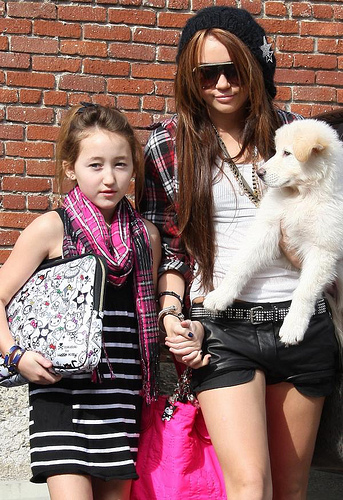 Miley Cyrus and her little sister, Noah Cyrus, are involved in fashion design.  Miley loves to customise her own T-shirts when she has the time and admitted it is the only thing she can do well besides “dance, sing and act.”

Miley often causes controversy with her raunchy stage outfits, but she has previously said she feels “claustrophobic” wearing frills, which she had to don for her Disney TV show ‘Hannah Montana.’   Miley said: “When they’re putting me in sparkles and in pink this final season, I have to grit my teeth.  I can’t breathe looking like that anymore.  A friend came by the set one day and said, ‘You don’t look very happy.’  I said, ‘I’m feeling claustrophobic in all these frills.’ “

Miley’s younger sister, Noah Cyrus, 11, is launching a children’s clothing range on Valentine’s Day.   According to the company’s press release, the range will feature “versatile styles that can be worn with sweet ballerina slippers, casual sneakers or paired with lace stockings and boots for more of a rock and roll look.”   Yes. you heard it – a children’s clothing line with that ‘rock and roll look.’