Elton John Wants Son To Have A Normal Old-Fashioned Childhood 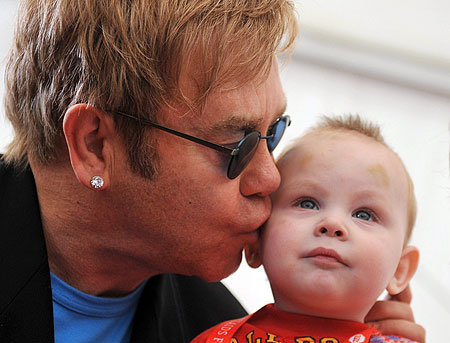 Sir Elton John said recently how he wants his seven-week-old son Zachary to have a normal childhood.

With two Daddies, four homes, and a life already well documented in the pages of celebrity magazines and celebrity blogs, Zachary Jackson Levon’s childhood is NOT average.  Born by a surrogate mother to Sir Elton, 63, and his partner David Furnish, 48, in California on Christmas Day, this little boy is already something of a media star himself.

Sir Elton, who will be known as Daddy (while David will be Papa), insists that he will bring up his son to have his feet firmly on the ground.

‘I so value my own childhood now, and the sense of wonder and personal discovery that I enjoyed, that we want to give Zachary – as much as we possibly can – the same thing.  A solid old-fashioned childhood, if you like,’ he said.  ‘So we don’t intend to spoil him – we’re going to try to give him a fun, carefree time of innocence, freedom, love and stability.’

Despite his obscene extravagance since finding fame, Sir Elton said he feared for children in today’s materialistic age.   The singer, who has homes in Los Angeles, the south of France and Venice as well as his 37-acre estate in Windsor, recalled: ‘A trip to the cinema was a treat, a trip up to London was unbelievably exciting. A trip anywhere.’

Reginald Kenneth Dwight as he was known back then, grew up in the council house home of his maternal grandparents in the outer London suburb of Pinner.  He was the product of a broken home, after his father left to start a new family.  He started playing the piano at three and at 11 attended the Royal Academy Of Music after being awarded a junior scholarship.

It was a time of frugality and struggle and family treats were rare. For day-to-day entertainment, the family would visit friends’ houses and have a sing-song.

Although Elton had a loving relationship with his mother Sheila, he described his father Stanley – a flight lieutenant in the Royal Air Force – as ‘a tough and unemotional man’.

He said his father was ‘dismissive, disappointed and finally absent’.

Elton’s parents married when he was six and the family moved out of his grandparents’ home to a semi-detached house nearby.  Sheila and Stanley’s relationship was difficult and years of arguments hugely upset their young son.  His parents finally divorced when Elton was 15. His father then remarried and had four more sons.

The singer, who has sold more than 250 million records, said last month: ‘You know my father never came to hear me play. Not ever.  I just wanted him to acknowledge what I’d done.’