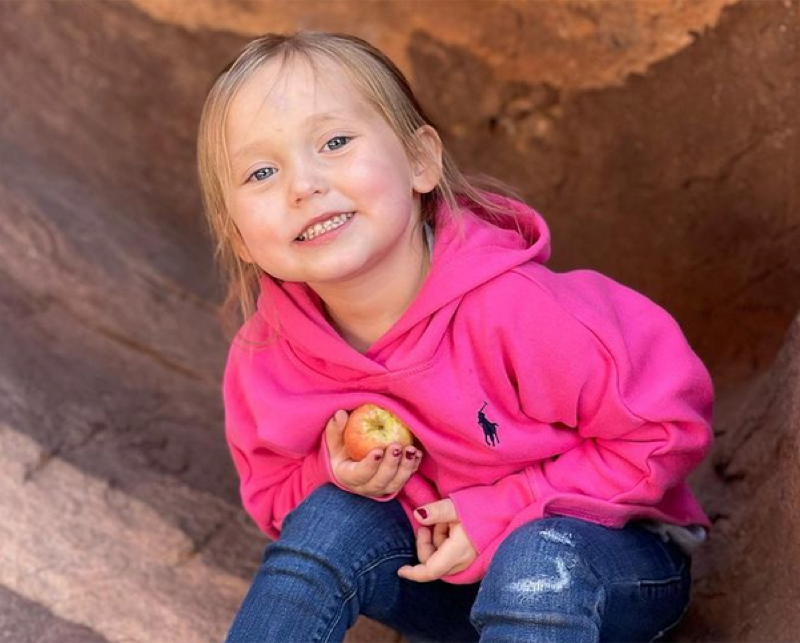 Mama June: Road To Redemption starlet Ella Grace Efird seems very sweet and like the Roloff kids on TLC’s Little People, Big World, she often saves the show from too much toxicity. An only child for about four years, she’s not only a big sister now, but also looks forward to more siblings. She likes to watch out for her little brother Bentley Jameson, but she’s still small, so she said that she’s “done with being a mom.”

You might recall that in Family Crisis when June Shannon abandoned he daughter Alana, she also lost contact with Ella Grace. There was a  scene that revealed the daughter of Pumpkin (Lauryn) and Josh Efird saying that she missed her grandma. Well, June missed a lot of time with the cute kid. So, WEtv fans were unsure if she was actually around for Ella Grace’s fourth birthday last year. Anyway, some of the photos that Pumpkin shared, revealed that she cuddled her baby brother very sweetly.

Milestones for the Mama June: Road To Redemption starlet also showed that she went for her first big girl haircut in 2021. WEtv fans really love little Ella Grace Efird. With all the drama in Family Crisis and Road to Redemption, she stands out as sweet and innocent. So, when WEtv shared a clip of her with baby Bentley Jameson Efird this week, they loved the scene that played out. It seems that Ella is very concerned about Bentley’s wellbeing.

Mama June: Road To Redemption Starlet Gives Up On Parenting

On June 19, WEtv posted up their clip of Ella Grace and said in the caption, “We’re so glad Pumpkin has an extra set of hands to help out with Bentley 😂.” It revealed cute Ella getting very concerned because Bentley tried to roll over. Of course, that’s normal and part of babies’ milestones. Anyway, she yelled out, saying, “he’s rolling over.” So, she rushed over to try and help him. Actually, she managed to help him and she sat him up next to her. But, as she noted, “babysitting’s hard!”

The Mama June: Road To Redemption starlet looked very sweet and fans loved it. Next, she took Bentley and laid him down again, being careful not to drop him. Done with that, she yelled out “Mom, I’m done with being a mom.”

Mama June: Road To Redemption fans thought that she seemed just way too cute. One of them wrote, “Those children are beautiful and little Bentley is mini Josh!”

Another fan said, “Lmaooooo I’m done being a mom 😂 I’m over here 💀💀🤣🤣🤣🤣.” Meanwhile, others thought that Ella looked “adorable” with her brother.

Not everyone loved the scene though, and a few people groused that it’s “not okay” for the little girl to try and carry her brother around.