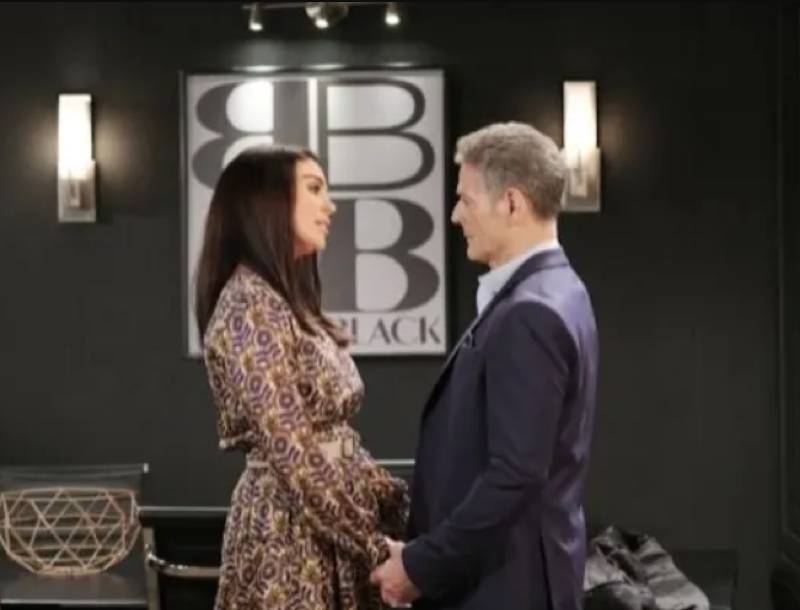 Days of Our Lives (DOOL) spoilers and updates tease that Chloe Lane (Nadia Bjorlin) will confront her father Craig Wesley (Kevin Spirtas) in an upcoming episode of Days of Our Lives and bust him, overhearing him on a phone call!

Days Of Our Lives Spoilers – Nancy Wesley Comes To Salem, And Suspects Her Husband Is Cheating

Days of Our Lives viewers will recall that Nancy Wesley (Patrika Darbo) came to Salem in a recent episode of Days of Our Lives, telling Chloe that Craig was cheating on her! She had called Chloe, who was involved in something else and didn’t have time to answer her phone, and suddenly had made the decision to fly from New York to Salem. Then she burst into Brady’s Pub where Chloe and Brady Black (Eric Martsolf) were talking, and barged in demanding why Chloe hadn’t returned her call and told them that Craig was cheating on her! Brady and Chloe tried to calm her down and asked why she would think that, and she revealed that she snooped in his packed luggage from a business trip to Dallas and found condoms! Chloe then privately gave her father a call to tell him that her mother came to Salem in a panic with allegations he was having an affair!

Days of Our Lives viewers will see that Craig makes a beeline for Salem after Chloe’s call, realizing he’s got a dumpster fire to put out, not wanting to ruin his marriage of thirty-something years! Longtime Days of Our Lives viewers will remember that while Craig was quite the player as a younger man, he’s been faithful to Nancy in subsequent years – until recently, as Chloe will find out later. He heads straight for Nancy, as he watches her implode and tries to convince her that there is no other woman in his life but her, and after some argument, she finally believes him and forgives him. Craig and Nancy make up in the hotel room, but it would seem that there is more to the story, as he lays staring at the ceiling and asking himself silently how he is doing “this”?! In his heart of hearts, Craig still wants to take care of Nancy and comfort her.

Days of Our Lives viewers will see Nancy and Craig meet up with Chloe and Brady for a meal together in an upcoming episode of Days of Our Lives, but Craig excuses himself to make a phone call! It so happens that Chloe, possibly on the way to or from the ladies’ room, overhears Craig on his phone call and obviously is very startled to hear him sweet-talking someone on the other end in a whisper!

Chloe then takes her father aside, out of range of her mother’s sight and hearing, and confronts him with what she overheard, and she wants some truthful answers! Craig cannot bring himself to lie to his beautiful, sweet daughter, and he does come clean to her; but what Craig tells her shocks her to the core, as it is something she never expected from him!