Days of Our Lives (DOOL) spoilers and updates tease that there will be a body found in a lake by Allie Horton, (Lindsay Arnold) Tripp Johnson, (Lucas Adams) Ben Weston, (Robert Scott Wilson), and Claire Brady (Isabel Durant) as they go out for a cool dip in the hot summer heat. Detective Eli Grant (Lamon Archey) will investigate and he won’t think it was an accident. The question posed by Days of Our Lives viewers is if the body will be that of one of two people in Salem recently who are making a whole lot of trouble – jealous Jan Spears, (Heather Lindell) or dirty Doctor Clay Snyder (Michael Lowry)! 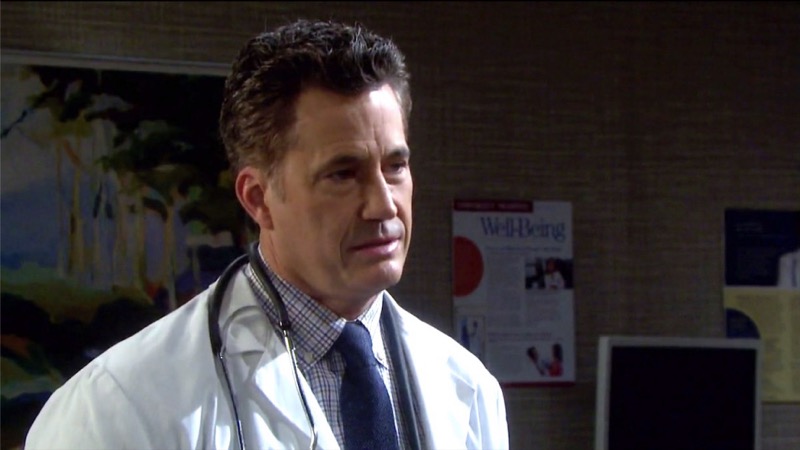 Days of Our Lives viewers will recall that these two have between them caused half the trouble in Salem, once Kristen DiMera (Stacy Haiduk) left and went on the run! One situation left unresolved as Kristen split was that of the location and condition of Chloe Lane, (Nadia Bjorlin) who happened to be tied up in the trunk of Kate Roberts’ (Lauren Koslow) car as Jan, with Claire in tow, hotwired it and hot pedaled it, resulting in not one, but two hostages.

Belle Brady, (Martha Madison) anxious to save her daughter when the scheme she and Shawn Brady (Brandon Beemer) put together to get Jan to confess to the murder of Charlie Dale (Mike C. Manning) backfired. Days of Our Lives viewers will recall that Dr. Clay Snyder was actually the one who caused it to backfire when he told Jan that a detective and his lawyer wife knew that she came out of her coma earlier than she said! But that is not all the mischief that Snyder has been up to – he blackmailed Gwen Rizchech (Emily O’Brien) into being his drug mule with threatening to reveal to her father, Jack Deveraux (Matthew Ashford) that she had lied about miscarrying her child before she fell down the stairs, which she did come clean about regarding accusing Abigail DiMera (Marci Miller) of pushing her. However, the timing of her miscarriage was another story entirely and Snyder blackmailed her into delivering drugs he likely had been stealing from the Salem University Hospital pharmacy.

Days Of Our Lives Updates – Detective Eli Grant Responds To The Call, Doesn’t Think The Drowning Was An Accident

Also coming up during the first week of June on Days of Our Lives, Philip Kiriakis (Jay Kenneth Johnson), Chloe and Jan get into a dangerous showdown after Jan instructs Chloe to kill Claire and Ben accidentally triggers a booby trap, putting Claire’s life in danger. Also during the first week of June, Tripp witnesses a tense exchange between Gwen and Snyder, who is also his superior as he completes his medical training in the hospital. Days of Our Lives viewers can see all these situations leading up to either Jan or Snyder being the victim in the lake!

The preview promo shows Ben’s triggering the booby trap, causing an explosion and possibly a fire, Jan handing a knife to someone – but it’s a mystery who because she gives a gun to Chloe to kill Claire. However, when the knife is handed over, it is clearly Jan who hands it over and the arm appears to be Chloe’s. But, perhaps it’s not. She may order Claire to turn Chloe loose which means she could be handing her the knife.

Philip is contacted by Jan to make an exchange for Chloe, but in the preview, Chloe and Jan struggle over the gun given to her to kill Claire. It also shows Xander Kiriakis (Paul Telfer) strangling Snyder, which will be to help Gwen, who he falls in love with – and it’s mutual! Depending on who was dumped in the lake, some of the four who find the body could be considered good for the murder! Tripp has a motive against Snyder – Claire has a motive against Jan, as Ben might also – the only one who doesn’t have a motive to kill either Snyder or Jan would be Allie!