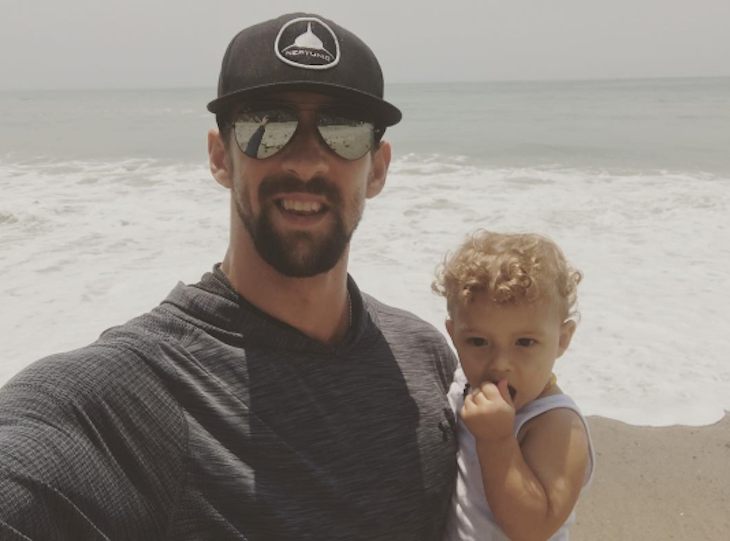 When Michael Phelps isn’t winning gold medals at the Summer Olympic games or racing sharks in the middle of the ocean, he’s doing what he loves the most, and that’s spending time with his family.The swimmer’s wife Nicole Phelps recently shared an adorable photo of the swimming sensation with their 14-month-old son, Boomer on her Instagram account.

In the photo, Michael can be seen carrying his cutie on his shoulders. Nicole captioned her photo with, “Seriously can’t get enough of my men…. #imightbeobsessed.”

Just recently Michael opened up about his post-Olympics life and his role as a father at home during a special Facebook Live session. He shared some interesting tid bits about Boomer, being a parent and living in Arizona with his family.

On how he and Nicole are adapting to parenthood, Michael said, “Honestly…its kind of cool to adjust together with my wife. Obviously this is the first time we are experiencing these things together as parents, and I think that’s something that’s helping us grow.”

During the chat, he also often referred to his son as “Bubba,” “Boom Boom,” and “Booms.” Michael also opened up on whether or not Boomer will be a competitive swimmer one day just like his famous father.

“It’d be fun to watch Booms break some records. If he swims, great,” he said, adding, “I’ll be able to help him a little bit…but that’ll be his choice if he chooses to swim…at a high level.”

He also gave advice for parents who want to teach their babies to swim by saying, “Make sure they know how to swim. Teach them the basics and find them the right instructor.”

Check back with CBL for all the latest on Michael Phelps and all of your favorite celebrity parents right here.

Justin Hartley Opens Up About Raising His Teen Daughter Isabella