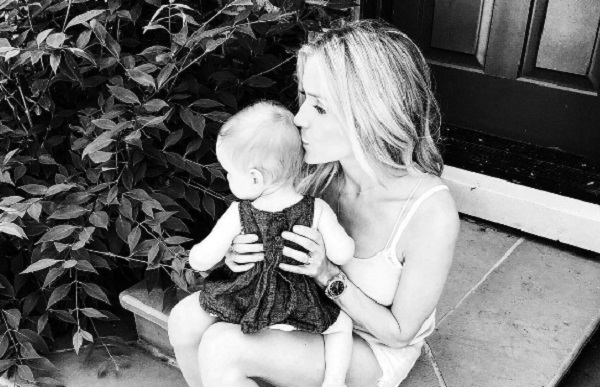 Laguna Beach and The Hills alum Kristen Cavallari shared an adorable new photo of her baby girl Saylor this week on Instagram.  Kristen Cavallari and her husband Jay Cutler announced the birth of Saylor James Cutler on November 23 2015, she’s not even a year old yet!

This week Kristen shared a sweet black and white photo of her and baby Saylor sitting outside and cuddling, soaking up the sun together.  Cavallari captioned the adorable snapshot, “Summer days with my bestie,” followed by heart emojis.

Summer days with my bestie 💕

We can all agree that Kristen Cavallari has come a long way since her reality TV days, and she is certainly wearing motherhood well.  She is certainly one protective mama bear.  Earlier this month Kristen got in to quite a heated debate on social media when some of her followers questioned her parenting and lectured her about her sons’ weight.

Apparently, some internet trolls felt that Kristen’s sons looked “too skinny” and Kristen was NOT having it.  Kristen posted a seemingly innocent photo of Camden and Jaxon splashing at the beach with their dad, and some cyber bullies decided to poke fun at her kids’ weight.  Kristen didn’t sink to their level, she did however take immediate action and joked that she “blocked the most people she has ever blocked in her life.”  Good for her!