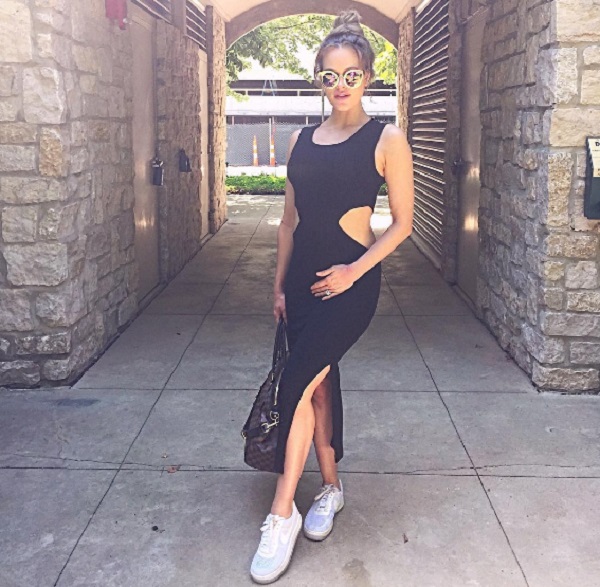 Dancing With The Stars pro Peta Murgatroyd might just be the most fit expectant mother we have ever laid eyes on.  The dancer certainly isn’t letting her pregnancy or baby bump get in the way of her workouts.  This summer Peta Murgatroyd and her fiance, fellow DWTS pro Maksim Chmerkovskiy announced that she was pregnant with their first child.

Since Peta and Maks’ pregnancy announcement, Murgatroyd been keeping her followers and Dancing With The Stars’ fans updated on Instagram, sharing photos of her growing baby bump.  Last week Peta reached a new pregnancy milestone, and she is officially four months along.  The adorable mommy to be posted a photo cradling her tiny baby bump and captioned it, “4 months!! Yippee! Feeling good and still eating pickles….  Boy or Girl??….”

This year Peta and her DWTS partner Nyle DiMarco won Season 22 of the ABC dance competition.  After confirming that she was pregnant in June, Peta confessed that she was pregnant while she was dancing in the finale.  In an exclusive interview with People Magazine, Peta explained that she was trying to keep her pregnancy a secret, but a lot of the DWTS cast and crew figured it out.

Murgatroyd dished to People Magazine, “I was so sick.  Nyle would see me falling asleep on the couches and on the floor of the rehearsal studio. He’d look at me like, ‘What’s going on?’ And I’d go, ‘Oh, I’m just tired.’ I had to make sure my costumes were hiding it as much as possible, but a couple of people noticed.”