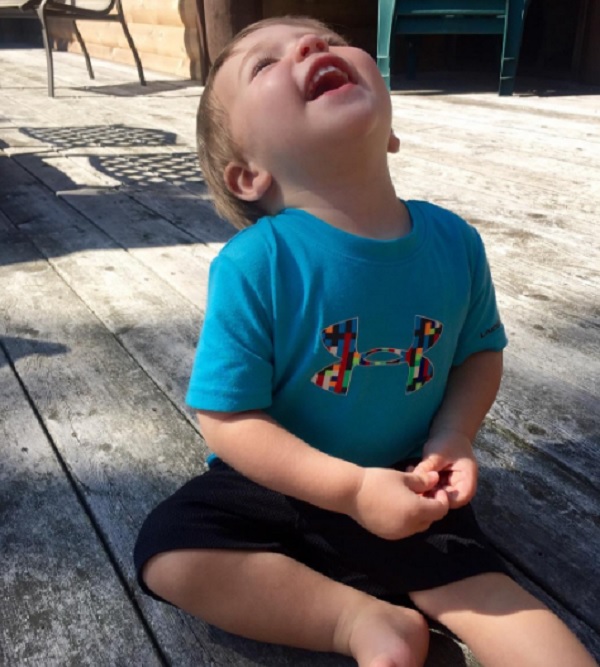 Country singer Carrie Underwood’s adorable baby boy Isaiah spent the weekend splashing in a kiddie pool and soaking up the son while his parents recorded his cute antics for Instagram.  Carrie Underwood and her husband, NHL player Mike Fisher, announced the birth of their healthy baby boy, Isaiah Michael Fisher on February 27 2015.  The spunky little toddler is now 17 months old, and growing up so fast!

Over the weekend both Carrie and Mike Fisher posted videos on social media of little Isaiah splashing in a tiny kids’ pool.  The toddler, who is full of life, was recorded running to the pool and diving in, pulling off a perfect belly flop.  His dad Mike can be heard in the background cheering him on while the happy little guy giggles and splashes in the water.

Carrie Underwood has somehow managed to keep producing hit songs while being a mom to 17 month old Isaiah.  The singer and mom juggles parenting and her music career with ease.  While Carrie was home hanging out with her hubby Mike and son Isaiah, her latest hit song “Church Bells” was being ranked #1 on the charts for 24 consecutive weeks!  The only country singing women who still have more hits than Carrie Underwood are icons Reba McEntire and Dolly Parton.

Recently Carrie Underwood sat down with Rolling Stone Magazine to discuss her powerful music.  Isaiah’s mom explained, “I love songs about strong women. I love being sucked into that story, rooting for the woman and seeing that she does something powerful that she never thought she could do. People are strongest when they’re pushed to their limits.”