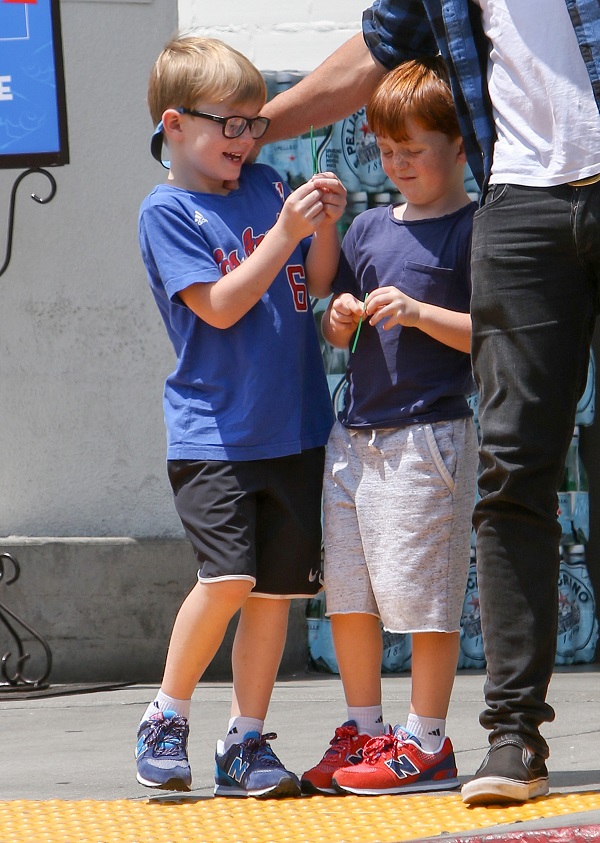 What a brave dad!  Anyone knows that going to a grocery shopping with a kid is not as easy task, let alone with two!  Actor Will Arnett was spotted picking up at a few things at Bristol Farms in Los Angeles, California on Thursday May 26.  Arnett had both his sons in tow, Archie and Abel.  And, they looked like they were having a blast spending the afternoon with their father!

Will Arnett and his sons’ mother, fellow actress Amy Poehler, were married in August 2003.  In 2008 Amy gave birth to Archibald (aka Archie) and then Abel came along in 2010.  Sadly, Will Arnett and Amy Poehler split in 2014, but they seem to be doing a wonderful job co-parenting the boys, who were the picture of happiness while out and about with their dad.  We can seriously only imagine how much fun it must be growing up with two of the funniest actors in Hollywood raising you.  Earlier this year month Amy Poehler spent the afternoon with the kids – and they were photographed taking a hike together.

Despite Will’s crazy hectic schedule, it’s good to see that of all the roles he is juggling, he hasn’t been missing out on time with his sons Archie and Abel.  Arnett’s hilarious animated Netflix comedy, “BoJack Horseman’s” Season 3 is set to premiere this summer on the online streaming service.  Arnett voices the part of lead character BoJack, a 90’s sitcom character in desperate need of some guidance.

Chris Martin Takes Apple Out To Dinner In Barcelona