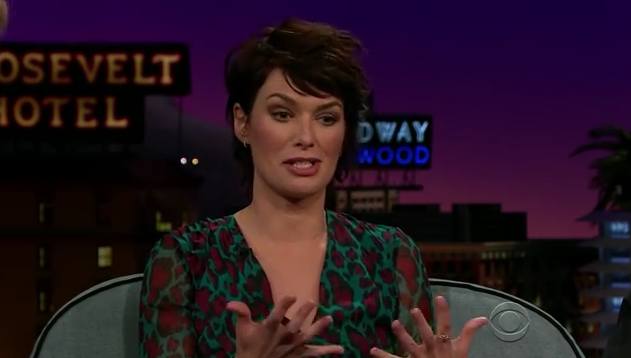 ‘Game of Thrones’ Star Lena Headey shared a hilarious breastfeeding story that will make fellow GoT watching mothers laugh. Fans of the HBO series will empathize with the celeb whose controversial character causes some awkward real life moments for the cast.

While appearing on the ‘Late Late Show’ the mother of 2 children told host James Corden about and experience she had with a ‘Game of Thrones’ obsessed fan. The ‘GoT’ enthusiast just happened to be Lena’s night nurse in charge of caring for Lena Headey after giving birth to her second child in July 2015.

“In the early stages of breastfeeding, you have to kind of get the milk in, that takes a bit of ‘hand milking’ of sorts,” Headey shared. “So my fella was trying to do it and the nurse said to me, ‘I think we should swap,’ and I went, ‘Yeah,’ ’cause I was about to punch him ’cause it was like milking a goat.”

Lena continued her ‘Game of Thrones’ crazy fan story saying, “She came around and sat next to me and squeezed my nipple and went, ‘Shame,’ ” Headey explained, referring to the scene in which her character, Cersei Lannister, was forced to walk down the street nude as punishment in the finale of season 5 of ‘GoT.’

“She was holding my nipple so I couldn’t really — and then she said it again and then I saw her go, ‘I’m sorry!’ She was like, ‘I can’t believe I said that!’” Lena laughed, completing the tale.

Do you have a funny story about breastfeeding? Share your lighthearted experience in the comment section below.

Rachel Zoe and Son Kaius Go On a Shopping Adventure