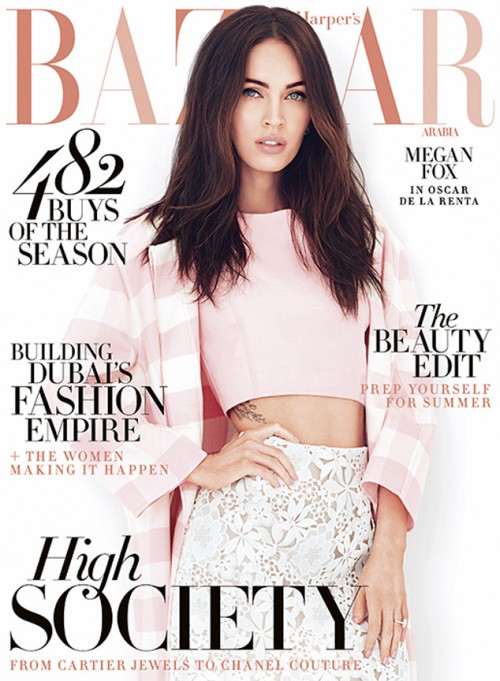 Megan Fox covers the April issue of Harper’s Bazaar Arabia while opening up about her family life with husband Brian Austin Green and their sons Noah and Bodhi.

The Teenage Mutant Ninja Turtles actress claims she is a free-spirit mom.

“I don’t think I need to teach my children with harsh words or with punishment. I believe that if I love them the right way, there’s no need for that. I’m a free-spirit mother,” she explained

Although, she added that she regrets not being “a better influence” on her step-son Kassius when she began dating Green.

“I don’t talk to Bodhi like he’s an adult, obviously, but I listen to everything he says to me and I believe in him: I believe that he sees things I don’t see, I believe he has things to teach me, and so I don’t act as a disciplinarian or an authority figure per se. I don’t ever want to be a restrictive force on him; I want to be an expansive force…I want him to be inspired by me because he constantly inspires me as well. Motherhood has really deepened me and has given me so much perspective. I’m very dedicated.”

On a lighter note, Fox spoke of Noah’s love of kimonos

“He’s obsessed with my collection! When we went on vacation to Hawaii he wanted one because he always sees me in these amazing, long, crazy kimonos. So I got a Missoni piece for him and he wears it and he’s so happy and proud and he’s singing all the songs from Tarzan… I like being magical and I like having freedom when I dress. I have some Cherokee background in me so I’m in for anything tribal or Native American,” she explained.

Having to young children, Fox and Green try make time for themselves by having weekly date nights.

“We ask his mum to come once a week so that we can go to dinner, go have sushi or something like that. But now that they’re so young, it’s just insanity,” she said.

Preparing Your Kids For A New Sibling