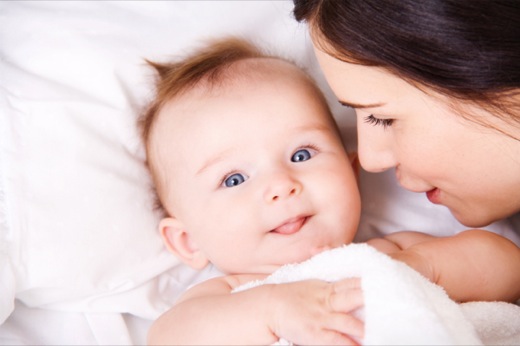 Babies exposed to two languages display better learning and memory skills compared to their monolingual peers, according to  new research.

The high levels of bilingual families in Singapore facilitated the collaboration between scientists and hospitals to study 114 6 month-old infants – about half of whom had been exposed to two languages from birth.

Past studies have shown that babies who rapidly get bored with a familiar image demonstrated higher cognition and language ability later on as children. A preference for novelty is also linked with higher IQs and better scores in vocabulary tests during pre-school and school-going years.

It is possible that since learning two languages at once requires more information-processing efficiency, the infants have a chance to develop the skills to cope.

Lead author of the study, Leher Singh explains that babies will benefit from having two languages early on:

Parents of young babies often second guess early bilingual exposure because babies seem quite limited in their language abilities to our eyes, and so we wonder sometimes if they will get confused by having two languages. So the research shows that they may benefit from having two languages early in life, and we know from other research that infants do not actually get confused.

Professor Singh goes on to say that parents should avoid projecting the difficulty of learning a new language onto their newborns:

As adults, learning a second language can be painstaking and laborious. We sometimes project that difficulty onto our young babies, imagining a state of enormous confusion as two languages jostle for space in their little heads. However, a large number of studies have shown us that babies are uniquely well positioned to take on the challenges of bilingual acquisition and in fact, may benefit from this journey.

The children were first tested in 2011 when they were six months old, and they will continue to be tested until they turn nine.