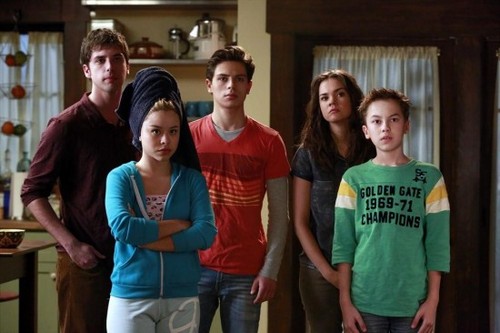 The Fosters ABC Family’s compelling drama returns tonight with its season 2 premiere called, “Things Unknown.”  If you have never watched the show before it is a compelling, one-hour drama about a multi-ethnic family mix of foster and biological kids being raised by two moms.

On tonight’s premiere episode it’s a big day for Callie as her future with the Fosters hinges on the revelation that Donald is not her birth father. What happens next could threaten to separate Callie and Jude once again. Brandon struggles to recover and come to terms with his guilt over sleeping with Dani, and big questions still remain about what Mike was up to the night Ana disappeared. Meanwhile, Jesus and Emma’s relationship impacts Emma’s standing with her teammates, which causes tension between them. Mariana has made a big change, much to Stef’s dismay. The episode was written by “The Fosters” Executive Producers Bradley Bredeweg and Peter Paige and directed by Norman Buckley.

We will be covering the season two premiere tonight at 9pm that airs on ABC Family. In the meantime, hit up our comments and tell us how excited you are for the second season of The Fosters and enjoy a sneak peek of tonight’s episode below.