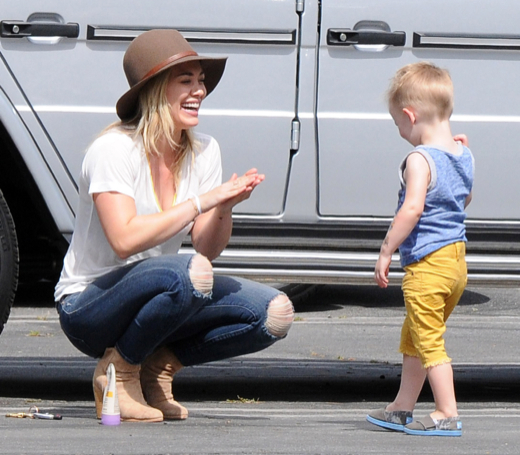 Hilary Duff was spotted enjoying a day running errands with her son Luca in Studio City, California on Thursday (May 8).

The singer was dressed in a white t-shirt and ripped jeans with booties while she made sure to take care of the toddlers sensitive skin. The two laughed and joked while she applied his sun lotion.

Since announcing her split from husband Mike Comrie in January, the two have surprisingly appear to be closer than ever. Not only did they go on vacation together with their son Luca, but they also spent some alone time at the Coachella Music and Arts Festival last month.

“We’re not in a rush for anything,” Duff told of their relationship while attending the ASPCA Cocktail Party in Beverly Hills, CA on Tuesday (May 6).”So we’re just trying to enjoy our lives and figure out what makes us happy and it’s working for us.”

“We have Luca as our main priority, but we do care a lot about each other. We’re adults and we’re making our way through life. Sometimes you do that together and apart and we’re gonna be and we’re going to do it in the most peaceful way possible,” she added.

Duff is set to release new music in the near future. She has described her new album as having an ‘earthy, indie-pop vibe’.