‘Alexander and the Terrible, Horrible, No Good, Very Bad Day’ Trailer and Ecard 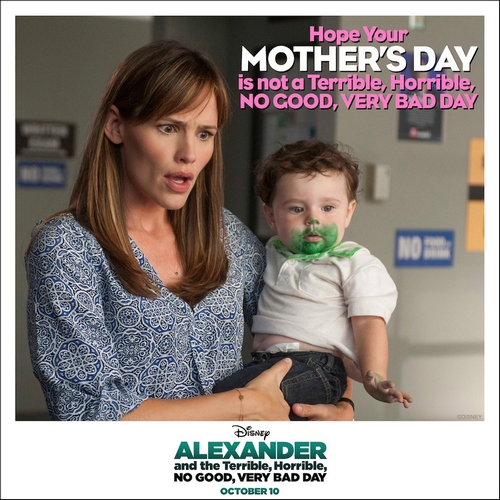 In honor of Mother’s Day this Sunday, ‘Alexander and the Terrible, Horrible, No Good, Very Bad Day‘ has created a fun Mother’s Day card to go along with the new trailer, poster, and images that debuted this week. The film stars Steve Carell and Jennifer Garner and opens in theaters everywhere on October 10th!

Based on the 1972 children’s novel by Judith Viorst, the film explores the terrible, horrible, no good, very bad day of Alexander and his family. In the book, the 11 year-old boy deals with things like mean teachers, gum in his hair and soap in his eyes at bath time. Disney’s version has been punched up with catastrophes like car crashes, fires, kangaroo chases and an unfortunate mishaps with a permanent marker that gives his baby brother a green beard.

You will see some familiar faces throughout the film, Bella Thorne from ‘Shake It Up‘ joins , Alexander’s brother played by Dylan Minnette from ‘Saving Grace.’