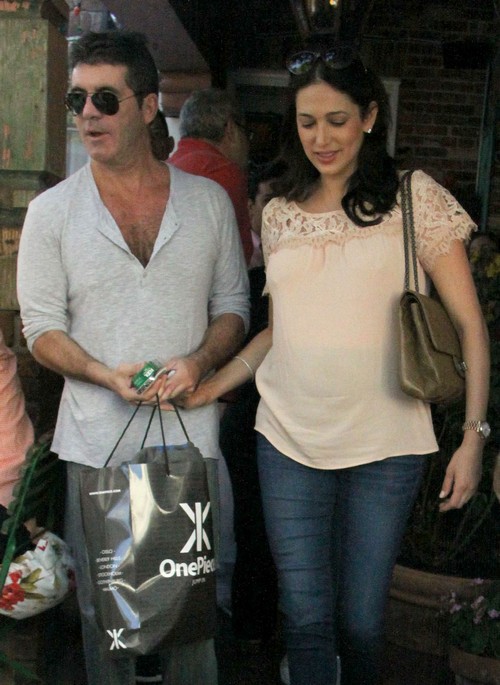 Simon Cowell is known for his pretty big schtick, but I think this one takes the cake here. At his and girlfriend Lauren Silverman’s recent babyshower in Cowell‘s Beverly Hills home, two of the schticky Music industry icon’s ex-girlfriends were seen making an appearance: Terri Seymour and Mezhgan Houssainy. Is this a common occurrence for people to invite their exes to their baby showers? Imagine if Andrew Silverman was there, things would of gotten pretty interesting pretty fast! But no, only the bossy reality show judge had his former lovers present to shower him with presents for his upcoming baby with his current lover.

I don’t know, maybe it’s just me, but I sure as hell wouldn’t want any presents from those people. Then again, Silverman is living her 15 minutes of glory and she probably knows that to make it last the whole way she needs to put up and keep her mouth clasped or Cowell could have one of his classic instant mood-swings. We’ve seen this story way too often over the last decade, often enough for the thought alone of Cowell rolling his eyes to be nausea provoking. Silverman will make us believe that it was all in the name of love, after all why would she leave a relationship where a 7-year-old was at stake with her former husband if not for the quest of true love. I mean, she did get pregnant with Cowell‘s soon-to-be first child while still technically married to her former husband – they have, of course, since split – so it must have been for some greater good in the end.

All that matters, in the end, is that Cowell has declared himself proud to be a dad. Why would the possible trauma that Silverman‘s first son might go through matter? No reason whatsoever. Cowell is probably also proud to have ended the divorce proceedings prematurely, which saved himself from being called a witness in an adultery divorce. But Simon Cowell is proud and in the end isn’t that all that really matters?

I guess he will “clear” things up at some later date when all the hoopla over the adultery and the controversy created by the uncertain consequences on Silverman‘s 7-year-old will eventually dwindle. Until then, Silverman better walk the straight line in Cowell‘s eyes because if his two exes being present at the baby shower is an indication of anything, it’s that she could be replaced at a simple snap of his money-tainted greasy fingers.