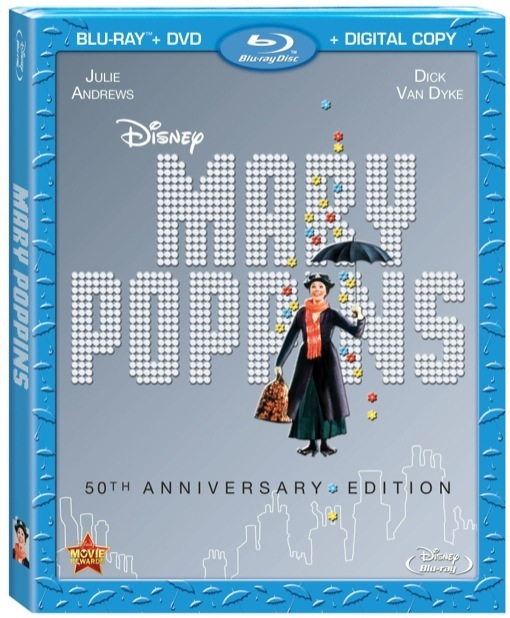 Mary Poppins is one of those movies you can watch over and over again. It is a true classic that has stood the test and continues to touch generations with its magical story.

As a child, I remember singing Supercalifragilisticexpialidocious over and over again on my Donald Duck record player. I sang the song so many times I can still sing along to song till this day!

In celebration of the 50th Anniversary of Mary Poppins, Walt Disney Studios is releasing the classic from it’s vault to shine for the first time on Blu-ray. Starring Dick Van Dyke and Julie Andrews in her Academy-Award winning role, and featuring iconic toe-tapping songs including A Spoonful of Sugar and Supercalifragilisticexpialidocious, Mary Poppins is a movie experience your family can share together again!

I loved how the new digital restoration helped bring the movie to life like never before. This is truly the best quality version I have seen of Mary Poppins.

Bonus features in the 50th Anniversary Edition include:

• Becoming Mr. Sherman (TBC by theatrical team): Join actor Jason Schwartzman as he sits down for a fun and musical-filled afternoon with Richard Sherman. In the new film, Saving Mr Banks, Schwartzman portrays the Disney Legend… half of the famous composing team, the Sherman Brothers who wrote all the classic songs from Mary Poppins, as well as many other favorites. Hear heartwarming, revealing stories about the making of this beloved musical, get more insight on working with Walt Disney, and get a unique sneak peek into Saving Mr Banks, starring Tom Hanks, and Emma Thompson.

Disclaimer: Celeb Baby Laundry has not received any payment as a result of this review. We were sent the product for the purposes of review.  All opinions are our own.