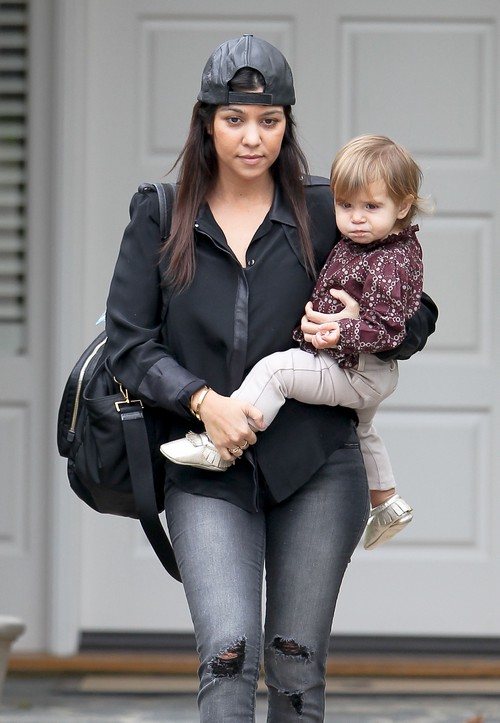 Keeping Up With The Kardashians star Kourtney Kardashian took her adorable 16-month-year old daughter Penelope to class in Beverly Hills.

Kourtney was dressed casually and comfy for a mommy/daughter day going makeup free and wearing ripped jeans and a black shirt.  The only addition to glam it all up was wearing black stilettos and carrying a Prada diaper bag.

Penelope was thrilled to have a day with her Mom and the fashionable little tot was wearing a cute patterned top, beige pants and shoes.  Penelope’s dad is Scott Disick and she is looking more like her Daddy each day.  Kourtney and Scottm who have been dating since 2006 also have a son together four-year-old Mason.

Meanwhile those rumors have started to fly again that Kourtney is pregnant.  Kourtney has made no secret of the fact that she would love to have another daughter.  OK Magazine is reporting that again that she is in the early stages of being pregnant this week saying, “Everyone’s buzzing that she’s already in the very early stages of pregnancy because she’s totally glowing right now…She’s got a lot of the same things that happened with her previous pregnancies. She’s gaining weight in the same places and has a puffy face. She and Scott both want a third baby, so it’s really possible already.”

If it is true the family could use some good news.  2013 has been a tough year for the Kardashians with the break up of Lamar and Khloe; Bruce and her Mom Kris and Scott’s Mom passing.