Quvenzhane Wallis On The Set of “Annie” In NYC 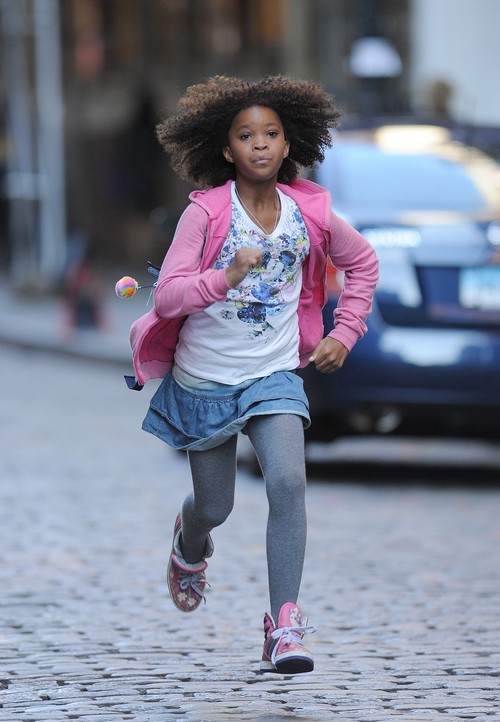 Ten-year-old Quvenzhane Wallis is filming Annie in New York and we caught up with her on the set yesterday [August 18th, 2013]  The movie is based on the musical of the same name.  Jay-Z is producing the film and they are putting a modern day slant on it.  Jamie Foxx is also starting in the role and he plays a character similar to Daddy Warbucks in the original.

Quvenzhane looked adorable with a pink hoodie, patterned t-shirt, jean skirt, grey tights and pink runners to match her hoodie and she ran though the streets of NYC.

At such a young age Quvenzhane already has an Oscar nominee under her belt for playing Hushpuppy in the critically acclaimed drama film Beasts of the Southern Wild.

The movie is set to hit theaters December 2013 and it also stars Rose Byrne, Cameron Diaz and Bobby Carnival.  The film follows a young orphan girl from Harlem, played by Quvenzhane, who is adopted by the richest billionaire in America.

Meanwhile rumors have been hitting the web that Jamie Foxx is dating none other than Tom Cruise’s ex-wife Katie Holmes.  So far neither Katite no Jamie is confirming the news.