Once Upon a Time RECAP For October 20th, 2013: Season 3 Episode 4 “Nasty Habits” #OnceUponATime 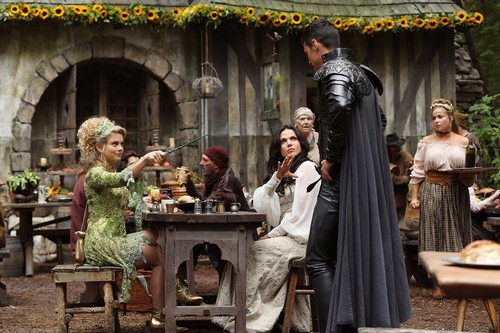 Our favorite docu-fantasy ONCE UPON A TIME returns tonight to ABC with a new episode called, “Nasty Habits.”  On last week’s show in their continuing quest to find Peter Pan’s hideout and save Henry, Hook suggested tracking down Tinker Bell in the hope that she would lead them straight to his camp.

Pan revealed to Henry why he had brought him to Neverland and in the Enchanted Forest, Neal had a plan that could transport him to Emma, but it would involve using one of Robin Hood’s most precious possessions. Meanwhile, in the Fairy Tale Land that was, Tinker Bell offered to help Regina improve her life.  Did you watch last week’s episode?  We did and we recapped it right here for you.

On tonight’s show Mr. Gold makes a decision to confront Pan, but will he go there to save Henry or give in to the prophecy that the boy will be his undoing? Neal finds himself back in Neverland and in the custody of one of Pan’s most loyal Lost Boys. And David struggles for his life as the poison continues to take its toll on him. Meanwhile, in the Fairy Tale Land that was, Rumplestiltskin goes in search of a missing Bae, who has followed a mysterious figure who steals away children with his music.

Once Upon A Time airs tonight at 8PM EST! While you wait for our recap, hit the comments and let us know how your excited you are about Once Upon A Time being back! Check out a sneak peek of tonight’s episode below!

ONCE UPON A TIME SEASON 3 EPISODE 4 LIVE RECAP, CLICK HERE ….

Kim Kardashian: I Still Have Some Baby Weight To Go