Kim Kardashian: I Still Have Some Baby Weight To Go 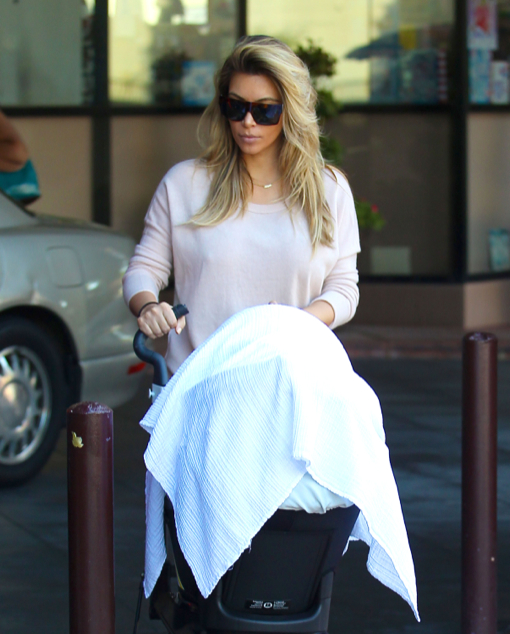 Kim Kardashian recently sat down with London’s Sunday Times Style to talk about being a mom to daughter North and how her style has changed since dating boyfriend Kanye West.

The reality star claims the 4-month-old has already influenced her fashion choices.

“I want to dress a little lighter colorwise. I think North looks cute in light colors, and then I want to wear light colors,” she reasons. “North doesn’t typically wear pink, though. She wears mauve or blush, not, like, typical baby pink.”

North’s baby daddy and Kardashian’s boyfriend has also been giving her advice on her outfits.

“You want your guy to think you’re really hot. I’ll put something on and he’ll [Kanye] say, ‘No, that doesn’t look good’, and I’ll trust him,'” she says.

Despite, plastering her body on Instagram and various magazine covers in the last week, the new mom said she still has more baby weight to lose.

“I haven’t exercised a whole lot so far, just because I’ve been busy with the baby and I don’t want to leave her. I still have some [baby weight] to go,” she says, adding that the Atkins Diet has done wonder for her. “Atkins worked for me and I don’t feel tempted to eat a bunch of junk food. It’s just about staying healthy – it will come off.”

What do you think? Is Kim dressing better now that she is mom?

Once Upon a Time RECAP For October 20th, 2013: Season 3 Episode 4 “Nasty Habits” #OnceUponATime