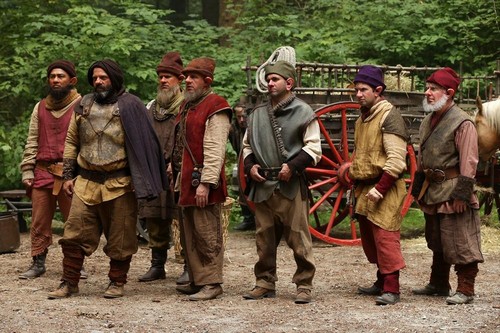 Our favorite docu-fantasy ONCE UPON A TIME returns tonight to ABC with a new episode called, “Quite a Common Fairy.”  On last week’s show Emma, Mary Margaret, David, Regina and Hook continued their search for Henry in Neverland,  Peter Pan appeared before a startled Emma and offered her a map that would reveal her son’s whereabouts.

But the only way to make the map appear was for Emma to stop denying who she really was and come to grips with her true feelings about her identity – and Mr. Gold received some unexpected advice from a friend that could lead him to understand his life’s journey while in Neverland. Meanwhile, in the Fairy Tale Land that was, when the Evil Queen presented Snow White with an offer to live her life with Charming in peace – with the caveat that she give up her claim to the throne – Charming made it his mission to ensure that Snow doesn’t take the offer.  Did you watch last week’s premiere episode?  We did and we recapped it right here, for you!

On tonight’s show in their continuing quest to find Peter Pan’s hideout and save Henry, Hook suggests tracking down Tinker Bell in the hope that she will lead them straight to his camp. Pan reveals to Henry why he has brought him to Neverland and in the Enchanted Forest, Neal has a plan that could transport him to Emma, but it would involve using one of Robin Hood’s most precious possessions. Meanwhile, in the Fairy Tale Land that was, Tinker Bell offers to help Regina improve her life.

ONCE UPON A TIME SEASON 3 EPISODE 3 LIVE RECAP, CLICK HERE …

Sarah Michelle Gellar Picks Up Her Ballerina From Class