Sarah Michelle Gellar Picks Up Her Ballerina From Class 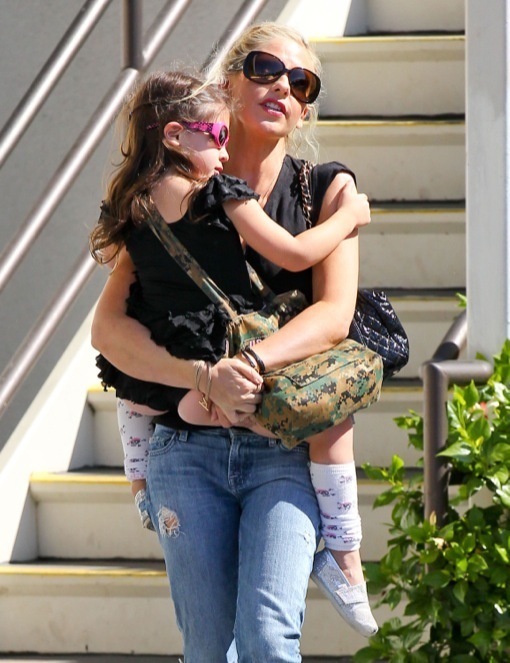 Sarah Michelle Gellar picks up her daughter Charlotte from her ballet class in Los Angeles, California on Saturday (Oct. 12).

The Buffy The Vampire Slayer actress wore a black shirt and ripped jeans as she carefully carried the youngster down the stairs. Charlotte was dressed in a black leotard and bright pink sunglasses.

Gellar recently called her latest role on CBS’  The Crazy Ones the best she has ever had.

“It’s amazing. I’ve been in this business for 33 years and it’s the most fun I’ve ever had,” Gellar told CBSNews.“I’m learning something new every day. I smile. I laugh. I have the nicest co-stars. Robin Williams — honestly if I went on and gushed about him even more you would probably think I made him up. He’s the kindest, most generous [person] and he’s so grateful for the position that he’s in. He cares about my children and their birthdays and what I’m doing. It’s a real family show for us.”

Gellar portrays Sydney Roberts, the daughter of Simon Roberts (Williams), a larger-than-life advertising executive who heads up a powerful agency but displays some unpredictable behavior. Sydney is way more focused and organized at the advertising firm and ends up having to parent her father a lot of the time.

Do It Yourself Halloween Costumes: Every Parent’s Nightmare