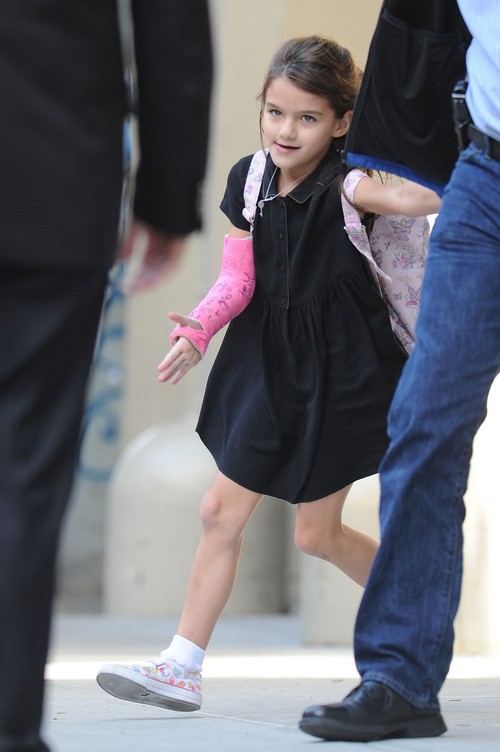 We caught up with Katie Holmes and Tom Cruise‘s daughter seven-year-old Suri Cruise as she headed home from school today.  Suri was wearing her black school uniform, cute sneakers and was sporting a back pack.  Her pink cast has been decorated with signatures and well wishes from her friends and family.  Some of the messages on her cast include “no butt smacking”, and a cute message from Katie that says “I love you” and signed ‘Mom” with a heart.  Suri broke her arm in late August.The fashionable tot is looking more and more like her Mom Katie every day.  This weekend Suri was thrilled because her Mom bought her a new iPhone 5s at the Apple Store in NYC.  I guess Mom was trying to make her feel better because she has to wear the cast.  Still Suri is a lucky little girl.

Meanwhile has it that Suri’s Dad Tom closed down an entire bungee jumping ground to throw a private party.  The bungee jumping was The Boots and BirdiesCentre in Lake Placid.  According to the Centre Tom and Suri said, “They liked Lake Placid because of the quietness and lack of paparazzi, and they said they would return.”  There is always so many paparazzi hounding them it must have made a nice difference.

Check out the photos of Suri below and enjoy!

What You Should Know About Silent Acid Reflux