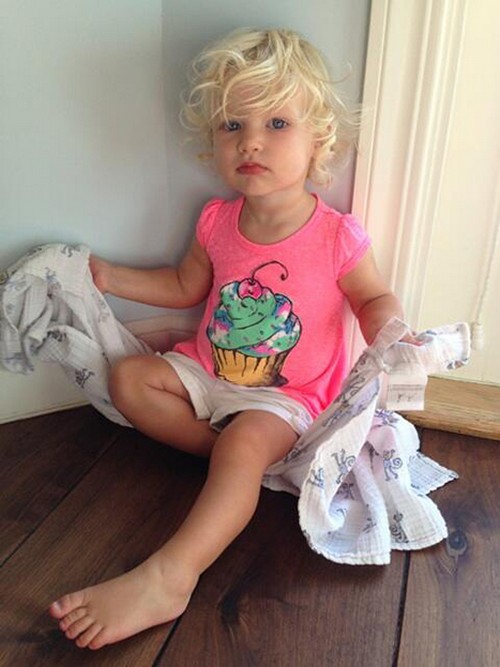 Proud Mama Jessica Simpson tweeted a photo of her adorable daughter Maxwell Drew yesterday [August 17th, 2013.]  The 15-month-old tot is the mini-me of the fashion designer.  Jessica tweeted the following message with the photo, “Maxwell is crazy beautiful.”  Jessica has been keeping a low profile since the birth of her son, Ace Knute two months ago.  No pictures have been released yet of Maxwell’s little brother.

The blond curly top, Maxwell Drew was dressed in white shorts and a bubblegum pink cupcake t-shirt and looked up up the camera with her big blue eyes.  She was holing a Aden + Anais blanket, a favorite of celebs.  Because of their popularity I bought one of the swaddle wraps for Ava and I loved it.

Jessica has been engaged to National Football League player Eric Johnson since November 2010.  Eric is the father to both her children.  Jessica claims their marriage was once more delayed for the birth of her son.  She said at the time she wanted to get married after the birth of her son.  When asked about getting married Jessica joked and said, “Let’s have this wedding already before I get pregnant with another one!”

Enjoy the photo of Maxwell!

Britney Spears Spoils Her Boys at Toys R Us