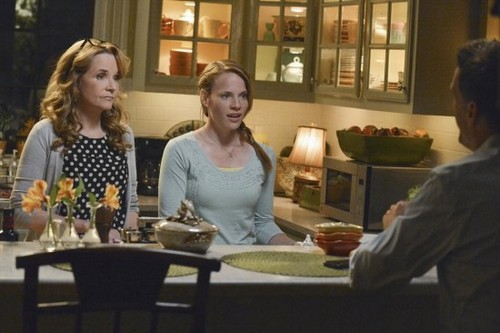 Tonight on the ABC Family Switched At Birth continues with a new episode called, “Prudence, Avarice, Lust, Justice, Anger.”  On last week’s episode Daphne was torn between her obligation to her family and her desire to spend time with Jace. John had to face the reality of his situation. Angelo offered to help Regina bring in business.

Meanwhile, Bay was intimidated when she met a cool, confident Army medic (guest star Allison Scagliotti, “Warehouse 13”) who served with Ty in Afghanistan.  Did you watch last week’s episode? If you missed it we have a full and detailed recap here for you enjoyment.On tonight’s show Nikki discovers that Toby and Simone have been in touch, and Emmett and Travis try to set Melody up on a blind date.  When Daphne and Jace (guest star Matt Kane) uncover a potential scandal regarding Senator Coto, they must decide what to do with the confidential information.  Angelo invites Bay to join him at a pivotal meeting concerning the custody of his infant daughter.

Tonight’s episode is going to be the usual great episode and you won’t want to miss it, so be sure to tune in for our live coverage of the show tonight at 8 PM EST!