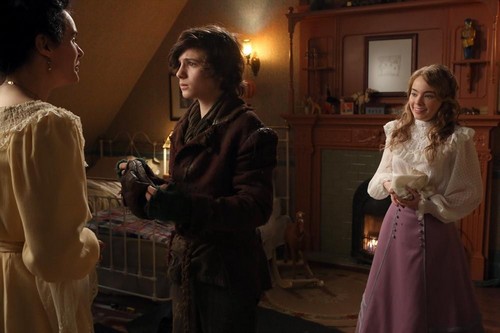 Our favorite docu-fantasy ONCE UPON A TIME returns tonight to ABC with a new episode called, “Second Star to the Right.”  On last week’s show with the aid of Hook, Regina attempted to put a plan in motion that would help transported herself and Henry back to Fairytale land.

But her plan revolved around a fail-safe that was planted within the curse, which if triggered could wipe Storybrooke off the map – and kill all of its inhabitants; and Emma’s suspicions about Tamara grew.  Meanwhile, in the fairytale land that was, the Evil Queen asks Rumplestiltskin to transform her into an unrecognizable peasant in order to kill an unsuspecting Snow White, with the twisted aim of earning the love and respect of her subjects.  Did you watch the last episode? We did and we recapped it here for you!

On tonight’s episode Emma, Mary Margaret and David go in search of Regina when they discover that she – along with some magic beans – have gone missing. But against Neal’s protests, Emma still believes that Tamara had something to do with Regina’s disappearance; and Mr. Gold contemplates telling Lacey the truth about his ability to conjure magic. Meanwhile, after Rumplestiltskin abandons his son and lets him travel alone through a portal, young Bae finds himself back in 19th century London and is taken in by the Darling family — befriending their daughter Wendy.

Tonight’s episode 21 is going to be exciting, and you won’t want to miss it. So be sure to tune in for our live coverage of the season 2 episode 20 of Once Upon A Time — tonight at 8PM EST!

ONCE UPON A TIME SEASON 2 EPISODE 21 LIVE RECAP, CLICK HERE …