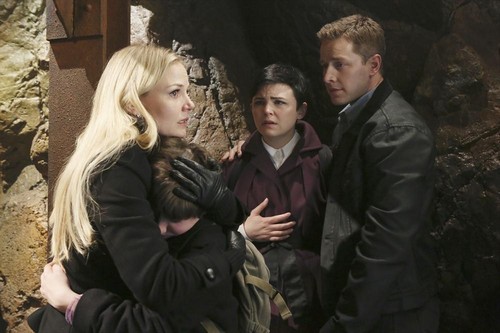 Our favorite docu-fantasy ONCE UPON A TIME returns tonight to ABC the finale of season 2 called, And Straight On ‘Til Morning.”  On last week’s show Emma, Mary Margaret and David went in search of Regina when they discovered that she – along with some magic beans – had gone missing.

But against Neal’s protests, Emma still believed that Tamara had something to do with Regina’s disappearance; and Mr. Gold contemplated telling Lacey the truth about his ability to conjure magic. Meanwhile, after Rumplestiltskin abandoned his son and let him travel alone through a portal, young Bae found himself back in 19th century London and was taken in by the Darling family — befriending their daughter Wendy.  Did you watch the last episode? We did and we recapped it here for you!

On tonight’s show the inhabitants of Storybrooke brace themselves for the end when Greg and Tamara detonate the trigger Regina had placed within the curse, with the annihilation of the town and its residents imminent; and Mr. Gold mourns the loss of his son, Bae/Neal. Meanwhile, back in Neverland of the past, Hook discovers his connection to a young Bae after he rescues him from the sea and soon realizes that the Lost Boys are in hot pursuit of the boy.

Tonight’s Season Finale is going to be exciting, and you won’t want to miss it. So be sure to tune in for our live coverage of the season 2 Season Finale of Once Upon A Time — tonight at 8PM EST! While you wait for our recap, hit the comments and let us know how your excited you are about Once Upon A Time being back! Check out a sneak peek of tonight’s episode below!

ONCE UPON A TIME SEASON 2 FINALE LIVE RECAP, CLICK HERE ….