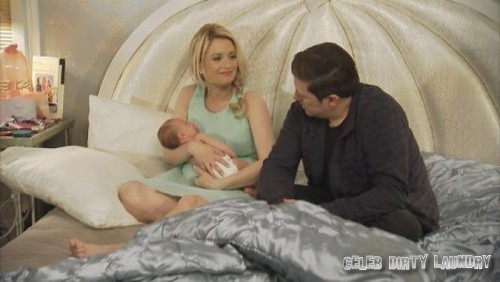 Tonight on Holly Madison‘s new reality E! special airs called, “Holly Has A Baby” premieres. The show follows Holly and her boyfriend, Pasquale Rotella, from their days of preparation to the delivery room and back home with the baby, giving viewers a rare up-close look at their loving family.

Holly recently said she wants a Kardashian sized family, so she is starting with a Kardashian like show.  In March 2012, Holly and her boyfriend, club promoter Pasquale, became the parents of daughter, Rainbow Aurora Rotella.

In this intimate one-hour special, viewers will follow Holly and her boyfriend Pasquale’s journey as they prepare for the arrival of their baby, move into a new home, and eventually welcome Rainbow into the world. Plus Holly and Pasquale discuss at length what the future holds for their family, including the possibility of wedding bells.

Viewers will watch as Holly and Pasquale bring their bundle of joy into their new home and Holly attempts to adjust to life as a mom. Through all of this, Holly and Pasquale discuss plans for their future and the possibility of Pasquale proposing. With Rainbow in tow, the pair look at diamonds and even make an unplanned stop at a Vegas chapel, but do they set a date and become officially engaged? Tune in to find out.