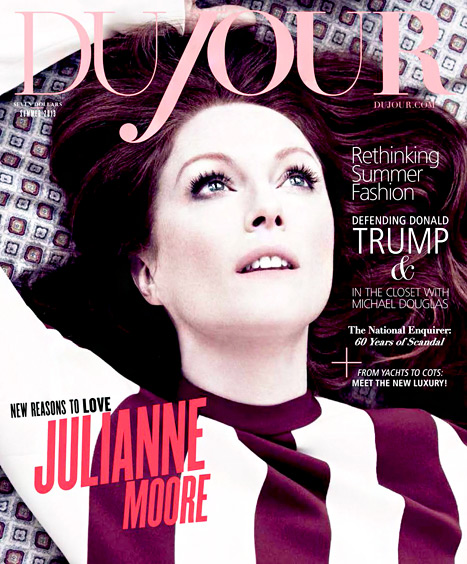 Appearing on the cover of DuJour magazine, Julianne Moore opens up about motherhood, aging, and her married life.

The Carrie actress insists she has no problem talking about being a mother, but finds the constant questions sexist.

“Do we have to talk about parenthood?” she asks the magazine. “I don’t mind, but I do think it’s an extremely profound experience, something that’s difficult to encapsulate in a single interview.”

Moore feels women should be asked a broader range of questions rather than the usual questions about motherhood and aging.

“Not that these things aren’t important, but I do feel like it becomes reductive when a woman’s life becomes, ‘Talk to me about your kids and how you feel about plastic surgery,” she told, adding, “I just think that it’s boring! . . . Our fear of aging is really a fear of dying; aging is a physical manifestation of decay, and I think that is what’s so upsetting to most people.”

Although, the star has no problem talking about why she married her long time partner, director Bart Freundlich, in 2003, after having son Caleb and daughter Liv together.

“When you say partner, people ask, ‘Do you mean your business partner?’ So we’d be reduced to saying boyfriend and girlfriend, and then there are always issues with hospitals and health insurance, and it just starts to seem silly,” she says. “We are a family. We are emotionally responsible for one another, so we wanted to be legally responsible for one another, too. I think the institution is what you make it.”

What do you think? Do interviewers bombard celebrity mothers too much with motherhood questions?