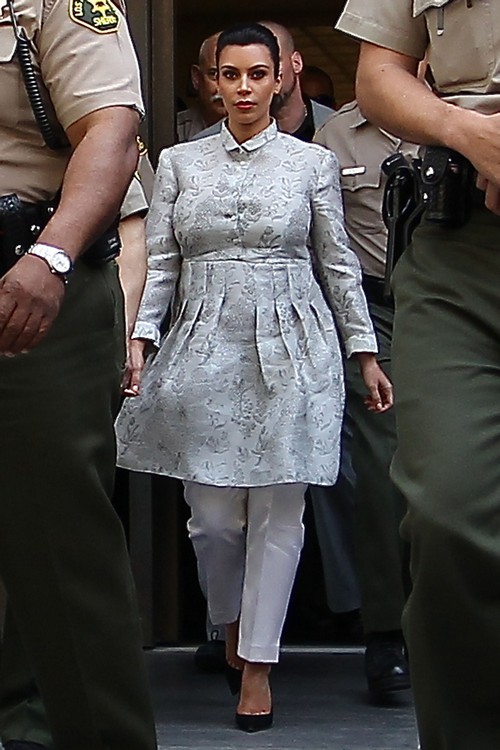 Kim Kardashian was surrounded by ten men of the Los Angeles County Sheriff Deputies as she left the Stanley Mosk Courthouse after attending her divorce hearing from Kris Humphries on April 12, 2013 in Los Angeles, California.

This is one of the first times we have seen Kim wearing sort of maternity wear.  Gone today were the tight dresses, leather pants and low cut tops she has been wearing.   However,  perhaps she should have stuck with her former fashion, this jacket was not a great choice.  The conservative grey patterned jacket looked like she took her curtains down and wore them.  I have not been liking the clothes she has been wearing during her pregnancy, but this is easily the worse choice yet.

Kim Kardashian and her ex NBA player Kris Humphries were suppose to both be appearing in court today for divorce proceedings.  The problem is Kris did not show up in court.  It is still unclear why the NBA star didn’t catch a plane on time, seeing that he has been waiting for this day for a long time.  Kris is seeking an annulment of their ten-week marriage, claiming it was based on fraud.

To check out more pictures of Kim at court today (you  don’t want to miss them) head over to BOHOMOTH  HERE who has the photo set!