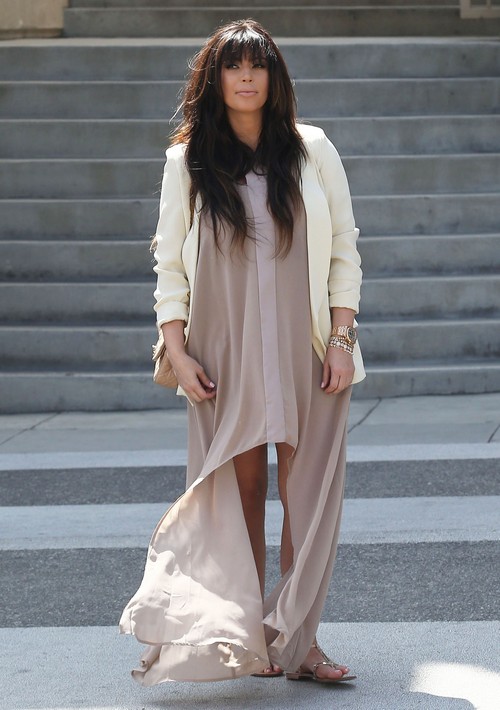 Am I the only one that would like to see Kim Kardashian completely disappear? I mean, can we wipe her completely from memory? I’m sure that Kris Humphries would like that too!  Anyway, Kim supposedly wanted a baby desperately. If you remember back, she was positive that she’d be married with kids by age 30.

So here she is, a few years past her own deadline and you’d think she’d be thrilled to be pregnant, wouldn’t you? Instead the dingbat is obsessing over her weight gain. She’s hitting the gym 7 days a week and adhering to a strict diet. Those things combined with her ridiculous, jetsetting schedule means that Kanye West’s (formerly) “perfect bitch” is really not putting her baby first. She can’t be if she’s actively fighting what her body needs to do to have a healthy pregnancy.

According to The Sun, Kim’s aunt, Joan Kardashian had quite a bit to say about the pregnancy.

“She can have a tummy tuck, which will take care of most of her weight fears. The family’s trying to convince Kim to relax and worry about losing the weight months from now. Other than her belly, which is still rather flat, every part of her body has ballooned. And this is with Kim holding to a strict diet. Imagine if she let herself go?”

They seem to have forgotten that Kim is supposed to gain weight and that her body is rearranging itself however it needs to in order to carry the baby. She should be focused on enjoying a bot of a break and attentive to what her body needs instead of killing herself. I wonder what Kourtney Kardashian would have to say about Kim’s approach to pregnancy. Kourt has had two babies and approaches pregnancy and her kids like a true earth mother. I bet she has gone rounds with Kim over how she is carrying herself.

Don’t you wish that, if we have to hear about Kim, then we’d at least her about her baby rather than her self-absorption? Tell us your thoughts in the comments below!