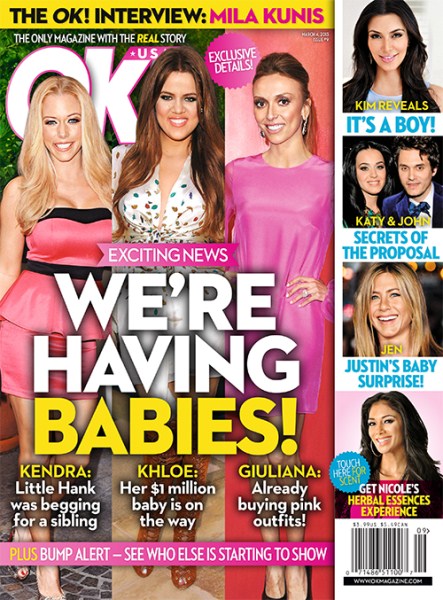 The minute we see a happy mom I think we instantly assume that they either are or will be trying to add to the family. Especially if their baby is in toddler ville then that old thing of having babies 2 years apart seems to kick in. OK Magazine is apparently having a slow news week and so they have decided top focus on a few women that very possibly could be welcoming new babies sooner rather than later.

Giuliana Rancic is one of those people. She and her husband, Bill Rancic welcomed baby Duke, via a surrogate last summer and  they couldn’t be happier. She has made t pretty clear that she would like to have as many children as possible and according to OK Giukiana is really praying for a little girl in the next year or so.

Also possibly on the mommy track is Kendra Wilkinson- Baskett. Her son is now three and she just seems to have recently found her balance between work and being a mom. She looks good, claims to feel good and her career is on track. That is usually the exact moment when we women decide to try for another baby.

No article about women hoping to conceive is complete without mentioning Khloe Kardashian, right? According to OK Khloe eats, sleeps and drinks the idea of motherhood and already has plotted out the perfect nursery for a future daughter. Do you think Khloe is still even trying for a baby, in light of all the rumored issues between her and Lamar Odom, it may not be the best time. However if Khloe blames herself for his behavior, her biggest problem has been conceiving so maybe she thinks that is she gets pregnant the problems will go away.

Do you think any of these women will be making a baby announcement this year? Tell us your thoughts in the comments below!

Kim Kardashian and Kanye West Are Having A Girl