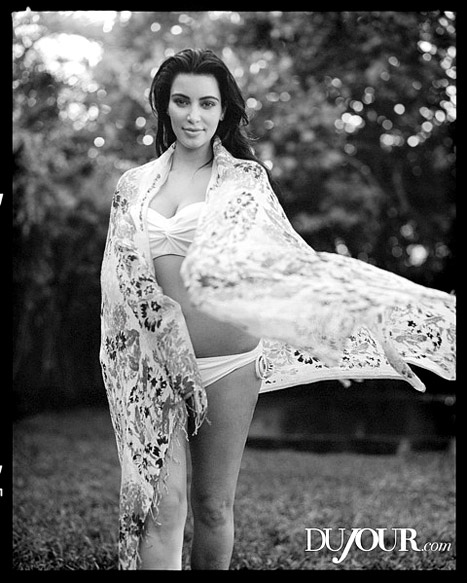 Kim Kardashian goes makeup less while baring her bump in the spring issue of DuJour magazine.

In her first photo shoot since announcing on Dec. 30 that she’s expecting with boyfriend Kanye West, the reality star holds a shawl while posing in a white bikini.

“I just feel so blessed and excited and ready for the next phase,” she tells the magazine.

Before she became pregnant, Kim always believed she would eat whatever she wanted.

“I used to always say I can’t wait to get pregnant because I will just eat whatever I want, but it’s completely different,” she said. “I’m like, OK, I want to eat as healthy as possible. Though lately I’ve been watching shows like I’m Pregnant and Addicted to Meth. It definitely makes me feel better if I’m wanting one sip of Diet Coke or, you know, too much sugar. I’m like, This woman is on meth.”

In the interview, Kim also admits she has learned a lot from Kanye in the short time they have been together.

“My boyfriend has taught me a lot about privacy,” she said of West. “I’m ready to be a little less open about some things, like my relationships. I’m realizing everyone doesn’t need to know everything. I’m shifting my priorities.”

With this new found want of privacy it only makes sense that she has decided to make the ninth season of Keeping Up With the Kardashians her last.

“I think there’s always an evolution of, you know, what you want to do in life,” Kardashian explained. “It’s all about finding things that really excite you and motivate you and spark you all over again.

To read the full interview pick up Dujour.

A Newly Pregnant Fergie Touches Down In London