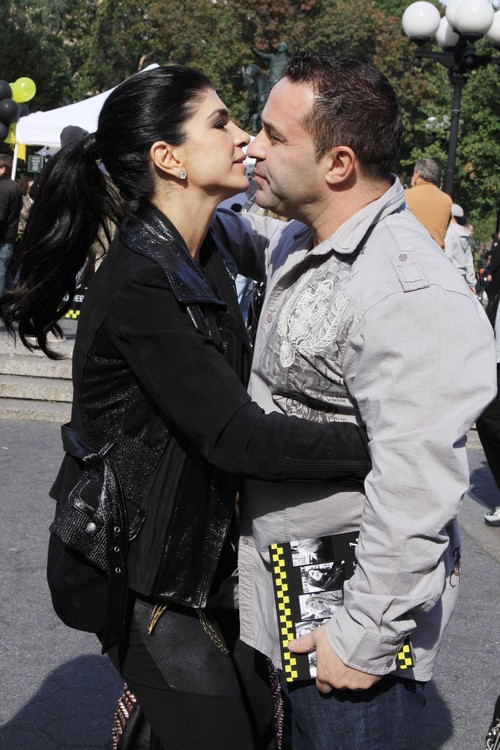 The last thing on earth that Teresa and Joe Giudice should be doing is considering adding another child to their already dysfunctional family but it seems that selfish, juicy Joe is fueling the situation. He has always wanted a son and four spoiled rotten, bratty little girls are apparently not filling that void.

Teresa has also always wanted a boy but has been claiming for years that she’s completely finished with pregnancy and there will be no more babies to carry. According to the latest issue of In Touch Teresa went through difficult fertility treatments back in 2009 in order to conceive their youngest child and at that point she vowed never to do it again. Supposedly Joe has suggested that they have a surrogate carry another baby and Teresa is receptive to the idea.

The self proclaimed New Jersey princess was crushed when her sister-in-law had a son a few years back and fans of The Real Housewive’s of New Jersey already know that Teresa cannot stand feeling one-upped by Melissa Gorga. Teresa is said to be seriously considering adding another baby to the family.

What happens if they hire a surrogate and the baby is another girl? Do they just pass it off on someone else then? There’s no guarantee they’d ever have a boy so this plan could really backfire in a huge way and then what? Will the baby still matter if it’s the wrong gender?

Then there’s the fact that Joe is often in trouble with the law and is looking at potential jail time for fraud. Who has a new baby with a man that might be going away , as Teresa puts it?  Also Joe may want a son but viewer’s have already seen with their own eyes that Joe is not a very involved parent!

Will the Giudice’s add to their family or is this just one of those rumors that will fade away? Tell us your thoughts in the comments below!