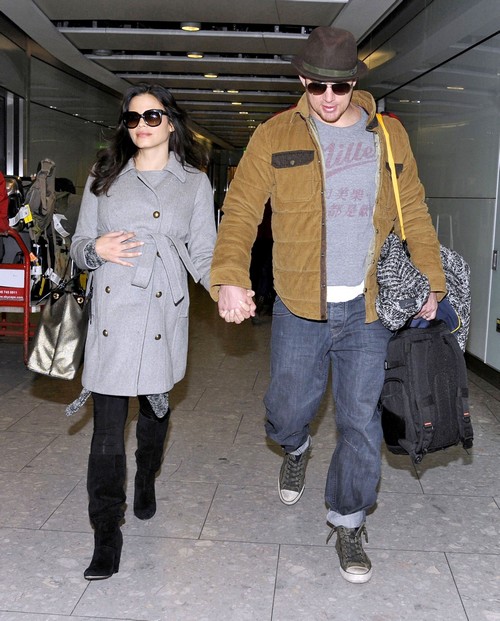 Channing Tatum has revealed plans on having his wife Jenna Dewan-Tatum give birth in London.  The actor, who attended the Academy Awards with the soon-to-be mother on Sunday, spoke to Ryan Seacrest on his full-time role as a father in months to come; joking with the American Idol host that getting Jenna pregnant is one of his “greatest production yet”.  Ha.

During the couple’s chat with Ryan, all Seacrest seemed to care about was the baby; asking questions like how could Dewan attend the Oscars while being pregnant, seeing that she’s expecting, before asking the two whether or not they plan to relax a little now that they are preparing themselves as parents. Well, according to Channing, things are about to get more hectic than ever after he signed on to shoot a new film in the UK, which is why their child will be born in London.

“I have a few more months [before my due date],” Dewan-Tatum revealed. “So I’m walking the carpet trying to keep it together tonight, but we’re good.” When asked if either of the two will be settling down a little and avoid the event shows to just have a nice night in, Channing explained: “Unfortunately no,” Tatum said. “We’re going to actually have the baby in London while I’m shooting, and then there will be no downtime whatsoever after that.”

Erm, Channing – why would you sign on to do another movie when you know your wife will be heavily pregnant once you start filming? Now she has to fly to London with you so that you can be by her side when she gives birth. Look how much work you are making this poor woman do! How mean of you! Ha, we kid, we kid. We like these two, and if they think that taking on more movie roles during this precious time in their lives is okay, then that’s totally their decision.

Fergie Jets Her Bump Across Europe