Kim Kardashian and Kanye West Babymooning in the City of Lights 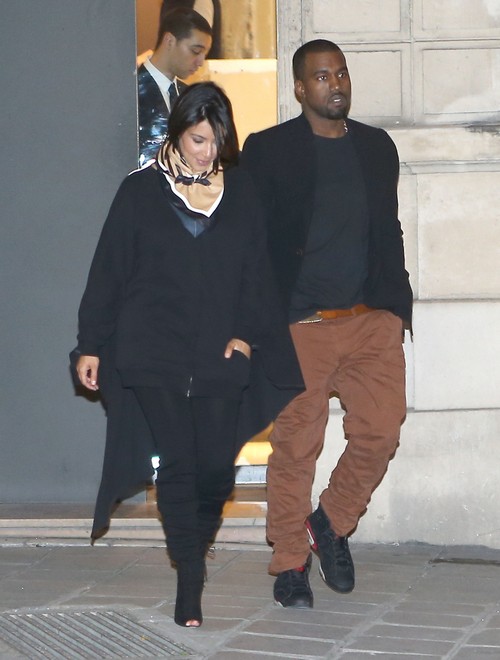 It has been an insane few weeks for Kim Kardashian and baby daddy, Kanye West. Once he decided to unexpectedly share the news that the couple is going to welcome a baby next summer, they have been swarmed with offers for new business endeavors. The paparazzi have been even more relentless than usual. I mean really, we only need to see so many photos of Kimmie high-tailing it to the gym in leggings with nothing beneath them! Still the shots keep coming!

Anyone, the high profile duo has decided to sneak off for a bit of a babymoon, according to a source close to them. This week they have been spotted in Paris shopping at high-end Lanvin and Celine stores before dining at L’Avenue restaurant. They managed to carve out some time in their busy schedules to spend a week alone together in the City of Lights. As they relax work will begin soon on the 11 million dollar mansion that they just bought in Bel Air. Kanye’s “perfect bitch” will be bringing their new baby home in style of course.

It seems that Kim would have everything she wants if only Kanye would marry her. That little detail is impossible as long as she’s technically still Mrs. Kris Humphries and I’m going to bed that he’s going to really drag their divorce out now.  He has been spiteful from the get go and so there’s no way that he’s going to clear a path for Kim to move on to hubby number three willingly.

Trips to Paris are one thing but how do you think Kim and Kanye will hold up once their new bundle of joy arrives and brings with it a huge dose od reality in the form of colic, dirty diapers and spit up? Tell us your thoughts in the comments below!