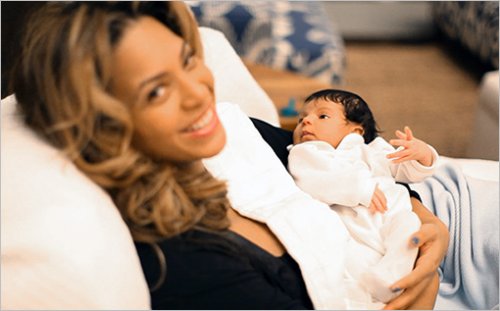 Celebrities seem to love giving their kids the oddest of names, but some push the envelope too far. BabyNames.com announced the best and worst names of 2012 as part of their annual baby name survey. 47% of survey respondents voted Blue Ivy as the worst girl’s baby name. I don’t think it’s that bad of a name, but middle America doesn’t seem to care for Beyonce and Jay-z‘s choice. It’s hard for everyday people to wrap their heads around celebrity name choices though – consider Victoria Beckham‘s sons Brooklyn and Romeo.

The top girl’s names ran to the more traditional. Most people selected Charlotte Grace as a favorite, daughter of Bachelorette Jenn Schefft and her hubby. The second most popular baby name was the daughter of Dixie Chicks’ Emily Robison who picked Violet Isabel and drew popular votes for the choice.

The best boy names surprisingly were non-traditional options. The best boy name was selected by Hilary Duff and hockey hubby Mike Comrie – this cute couple named their son Luca Cruz which didn’t do much for me, but drew popular support. The runner up was opted by parents Tori Spelling and Dean McDermott who named their fourth child Finn Davey. I do like this choice – it’s a nice blend of offbeat with traditional.

Baby names founder Jennifer Moss said of 2012, “We’re not seeing crazy names like Pilot Inspektor or Moxie Crimefighter anymore, I think celebrities are becoming a little more sensitive to the fact that the child has to live with his or her name.” Moss said people tend to dislike nouns and adjectives as first names and suggested that if Bey and Jay had switched it up to Ivy Blue, they could have had a winner.

So for all those gestating celebrities – think long and hard about your baby names – remember they last forever! I know Kim Kardashian and Kanye West may consider a K name, but let’s hope it’s not too Kuckoo…