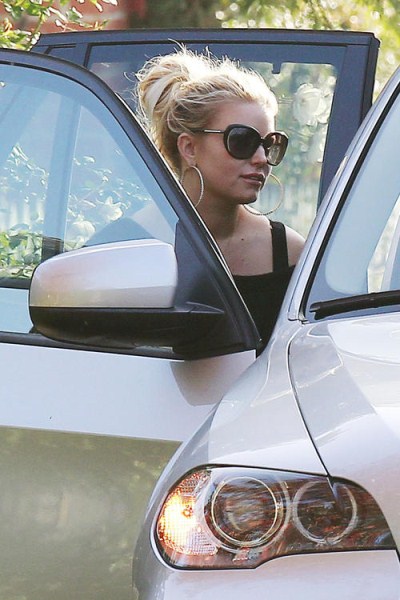 It’s no news that Jessica Simpson is pregnant again. Days before the news broke of her official second pregnancy; Simpson tweeted, “Eventually all things fall into place. Until then, laugh at the confusion, live for the moments, and know everything happens for a reason.” Not long after that telling tweet, it was announced that Simpson was pregnant with her second child, only seven months after she gave birth to Maxwell. A source said, “It definitely wasn’t planned. But yes, Jessica is pregnant again.”

Recently, however, Simpson and fiancé Eric Johnson were spotted in Los Angeles, California, house hunting. Their soon-to-be four member household needs enough space to house not only the 7-month-old Maxwell, but to also have enough room for when the latest member of the family arrives in roughly seven months.  Simpson looked classy in a black sweater, hoop earrings, and oversized-all-the-rage sunglasses.

The 31-year-old ex-actress/reality television star/singer is currently a mentor on NBC’s super popular Fashion Star – a reality television show in the vein of Project Runway. Simpson also lately underwent massive weight loss during her highly publicized Weight Watchers campaign. TV advertisements showed the star talking about her healthy lifestyle and her love of exercising. Unfortunately, during Simpson’s reign as the face of Weight Watchers, she was spotted exiting a black SUV looking larger than life. The image sparked rumours that Simpson was photo edited on her then recent magazine cover, but she proved her critics wrong and appeared in public a few weeks later looking thinner than ever.

Do you think Jessica should have another child so soon? What are your experiences with having children so close to one another? Let us know your thoughts in the comments below.

Breakfast on the Go-Go!