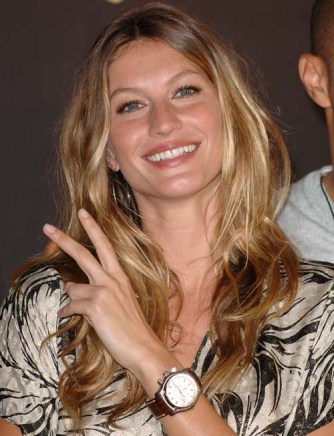 Congratulations are in order for Gisele Bundchen and New England Patriots quarterback, Tom Brady.  On Wednesday, Gisele gave birth to a healthy daughter at home in Boston. The baby joins older brother, Benjamin Rein who will turn three this weekend and also five year old John (Tom’s son from a previous relationship).

The couple never officially announced or confirmed the pregnancy, but when Gisele hit the beach in Rio de Janeiro back in November wearing a leopard print bikini there was absolutely no doubt that the model was ready to pop. She did announce the birth of their daughter, named Vivian Lake, on her Facebook page saying,

“We feel so lucky to have been able to experience the miracle of birth once again and are forever grateful for the opportunity to be the parents of another little angel. She is healthy and full of life. Thank you all for your support and well wishes. We wish you and your families many blessings.”

Back in 2007, Gisele had said in a Vanity Fair interview that she’d be lying if she said that she didn’t want to have a big family with lots of kids. It looks like she and Tom are well on their way to having a large crew around the dinner table!

Now that she has given birth, how long do you think that it’ll be before Gisele is skulking down a runway looking as long and lean as ever? Will she return to work as quickly as most models seem to or do you think that she’ll take a bit of time off to be with her expanding family? Tell us your thoughts in the comments below!