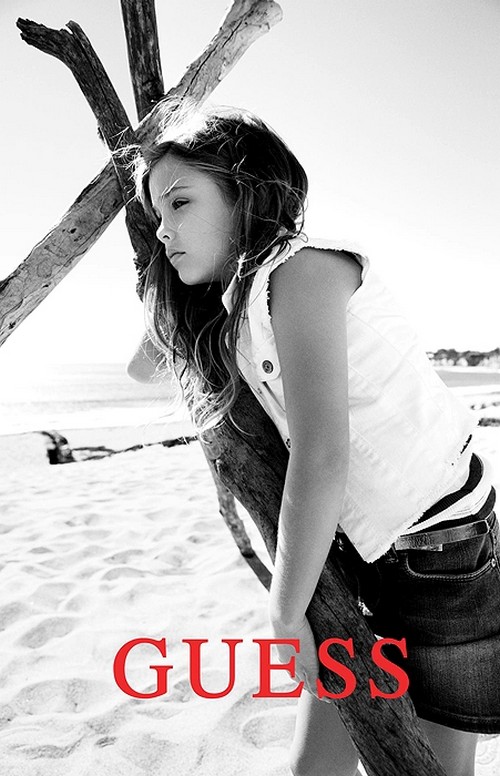 Well, for a few years it looked like Larry Birkhead really did have little Dannielynn‘s best interests at heart. He was left with custody of the child when her mother, Anna Nicole Smith overdosed back in February 2007 and for the most part it seemed he was encouraging the child to lead a pretty normal life. There was the occasional magazine spread but it always came across as a check in of sorts, where readers were sort of reassured that Dannielynn was living the life of a typical little girl.

Somewhere along the way Larry’s ideas shifted though because now his daughter has launched a modeling career and right off the bat she is the new Guess Kids Girl. If you were a fan of the glossy fashion mags about 20 years ago then you’ll remember that Anna Nicole Smith was one of the hottest Guess models ever and it’s more than a little ironic that her six-year old is now signed with them. According to The National Enquirer, Anna Nicole’s family is horrified that Dannielynn is modeling!

“We were proud that he’d kept Dannielynn out of the public eye, but now Larry is turning her into a mini-Anna Nicole. It will be awful to see Dannielynn plastered all over billboards and bus stops like her mother was 20 years ago. We just pray that she doesn’t make the same bad choices her mother did. Larry needs to be very careful because Dannielynn can be easily exploited. She should not be walking her mother’s walk or she may be headed down the same path.”

Do you think that Larry is exploiting his daughter just for the sake of money? For a long time Anna Nicole served as his personal ATM so sadly, it would make sense for him to now use their daughter as an easy way to pocket a nice chunk of cash. Should Dannielynn be modeling? Tell us your thoughts below!

Gwen Stefani: “I Have Learned to Delegate”