Once Upon a Time Recap: Season 2 Episode 8 “Into the Deep” 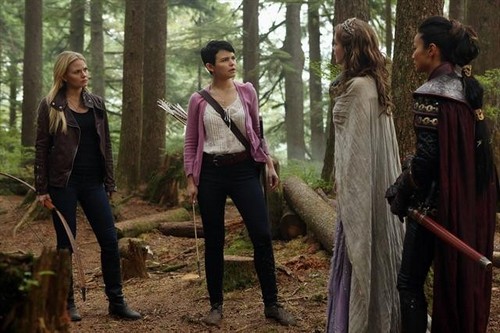 Tonight on ABC our favorite fantasy drama show ONCE UPON A TIME returns with another great episode.  Tonight’s episode is called “Into The Deep.”

On last week’s episode Ruby’s feared turning into a wolf during the first curse-free Storybrooke full moon was confirmed when one of the town’s residents was viciously murdered, and Ruby was the prime suspect; Decker – aka King George – threatened to expose David as a shepherd, not a prince, and not fit to run the town as sheriff; and Leroy stumbled upon some treasure in the Storybrooke mine that could help bring Mary Margaret and Emma back into our world. Meanwhile, in the fairytale land that was, Red Riding Hood found a kindred spirit in Anita, a charismatic and mysterious leader of a pack of humans who, like Red, turned out to be wolves.  If you missed the show?  If you did we have a full and detailed recap here!

On tonight’s show Cora does everything in her power to steal the compass away from Mary Margaret and Emma in her quest to find the entrance to Storybrooke. Meanwhile, in order to protect Henry from further danger, Regina and Mr. Gold must put David’s life in jeopardy in an attempt to put him in contact with Mary Margaret across the lands to give her vital information that could help her and Emma return through the portal back to Storybrooke.

Tonight’s episode 8 is going to be exciting, and you won’t want to miss it. So be sure to tune in for our live coverage of the season 2 episode 8 of Once Upon A Time — tonight at 7PM EST!  While you wait for the recap, check out the sneak peek of tonight’s episode below!

ONCE UPON A TIME SEASON 2 EPISODE 8 LIVE RECAP HERE!

Anna Paquin Take a Stroll With Her Twins