Katie Holmes Coping After Divorce From Tom Cruise: Ice Cream And Family Talks Got Her Through It 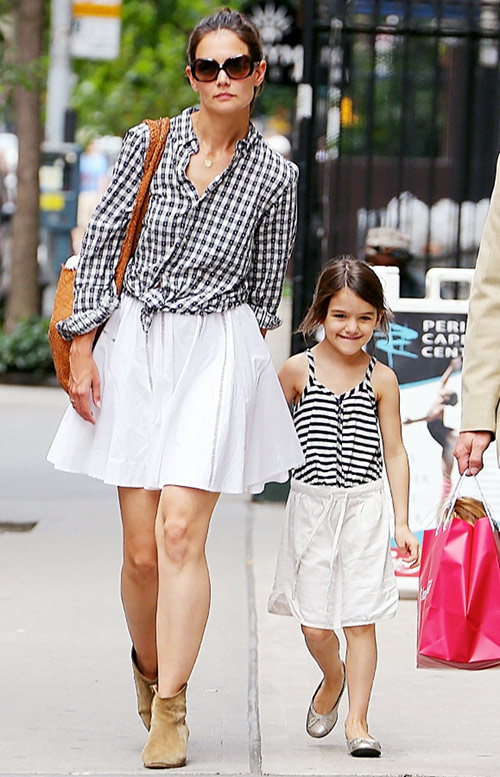 Mouths gaped awkwardly when the divorce of Katie Holmes and Tom Cruise was announced–and then suddenly finalized in record time. (I guess those proceedings go faster if you have hundreds of millions?) While the marriage was definitely abnormal, by Hollywood standards especially, no one expected Tom to let go so easily, or for those smiles to be plastered on. Katie seemed strong and self assured, quickly moving out (all the way to New York City), taking Suri, and hiring a kick butt legal team. The young mom spent time in Ohio with her family after the split, and is only just opening up about her emotional recovery.

Katie described her time there as a balance between three important things: eating, running, and talking. She discovered a heart-attack dessert called Spouse Like A House, which is a toss of dark and white chocolate covered pretzels, smothered in caramel. Worst part is, she didn’t gain a pound because she devoted her time to running at a neighbourhood park. But it wasn’t all gorging and scenic runs. Katie turned to her family for support and advice as she learned to be a single mom. She explained, “I have these moments where what’s going on in my life is unbelievable, and you have to tell everyone to figure out how to respond. My siblings and I are always on the phone saying: ‘Oh my God, what do you think? What does mum think? What does dad think?’ And then you act accordingly.”

I’m glad to hear she has a strong support system to whom she and Suri can always turn. I can’t say what it must have been like for Suri to see her mom in that state, but being surrounded by aunts, uncles, and grandparents who feed you ice cream every night probably helped her too! We’ve been pretty worried about how this split has affected Suri, as her dad has basically abandoned her and moved to London to film. Of course, she’s financially set for life thanks to child support, but it must be emotionally devastating. I hope Tom’s being honest about Skype dates! What do you think of Kate’s recovery plan?