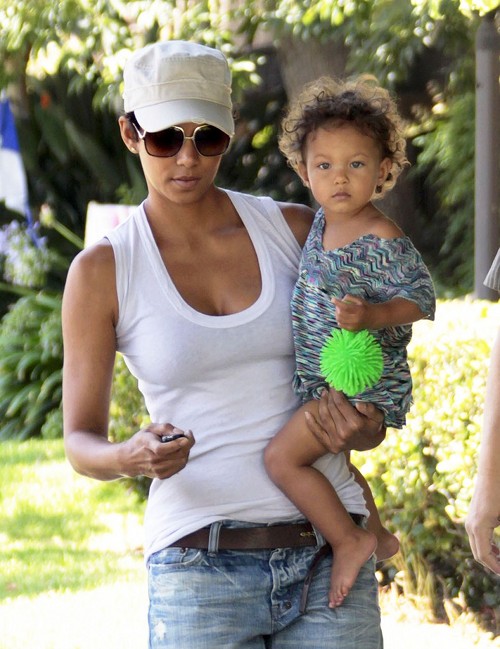 Separation is ugly, especially in Hollywood! Oscar winner Halle Berry has been fighting with ex Gabriel Aubry over daughter Nahla, and it’s been gruesome. The actress, who’s put acting on the back burner ever since she gave birth, was hoping that her fame and fortune would buy her way through a long custody battle. Halle wanted to move Nahla to France, permanently, so she could live with her fiancé, French actor Olivier Martinez.

Because it’s totally normal to just move your child to a different country. Halle goes through men so quickly (this will be her third marriage, by the way) that I suppose in her mind it must make sense that she keep the kid moving wherever she goes. She’s like the opposite of a baby daddy—instead of impregnanting women and ditching them, she just plans to collect children and steal them away from their families.

Although, Halle didn’t make it sound so evil and twisted—her reason for moving Nahla to Paris was not so she could be with her lover, but because strict paparazzi laws in France would create a safer place for her to raise her daughter. If you twist it enough, you could almost say that Gabriel is a monster for fighting to keep Nahla in the land of free press and harassing photogs! Whatever you think of it, their judge ruled in favor of Gabriel, and denied Halle permission to run away to France.

After the couple split, they went to court to hammer out a custody agreement. Halle released a statement explaining the judicial intervention—she claimed they wanted help with the delicate issues, and that neither was seeking full custody because “a child needs both her parents.” Except if there’s a chance to replace French-Canadian biological dad with purely French step-dad. Then you should rip the child away and never look back! Do you think Halle should be allowed to move her daughter to Europe permanently, or is the judge right? Is she being super selfish?

Katie Holmes Coping After Divorce From Tom Cruise: Ice Cream And Family Talks Got Her Through It