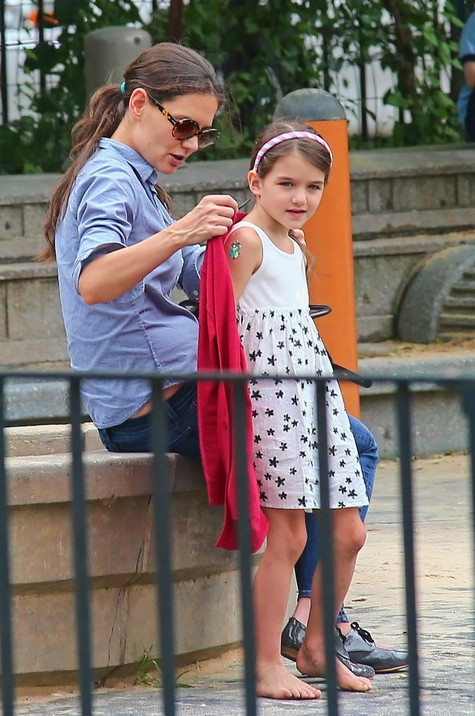 I guess when you are as famous as Katie Holmes you have to get a bit creative in order to protect your kids privacy. It’s even trickier for the star because on the off-chance that she is not attracting attention herself, her daughters unique name is enough to make heads turn all on its own. According to the latest issue of In Touch, Katie now refers to six-year old Suri as “Sara” in public in order to draw less attention to her daughter.

“Everyone in the world knows Suri Cruise, so if Katie or a babysitter says, ‘Suri,’ people immediately look to find her.”

In recent months Katie has been heard onset calling Suri by her alternate name and while on a trip to Build-A-Bear Suri herself requested that her bear be named “Sara with no H’ so it sounds like she’s loving the name change too.

I think it’s a pretty smart move on Katie’s point to call her daughter a more common name at least in public. She has said she just wants a normal life for her since splitting from Tom Cruise and it seems like Katie has taken many steps towards normalizing Suri’s still gifted life.

Do you think this is a wise move on Katie’s part or is it instead just another way of separating her daughter from an other six year old? The way I see it, if celebrities check into hotels under fake names then it makes sense that they would take extra steps to protect their children as well! Tell us your thoughts in the comments below!