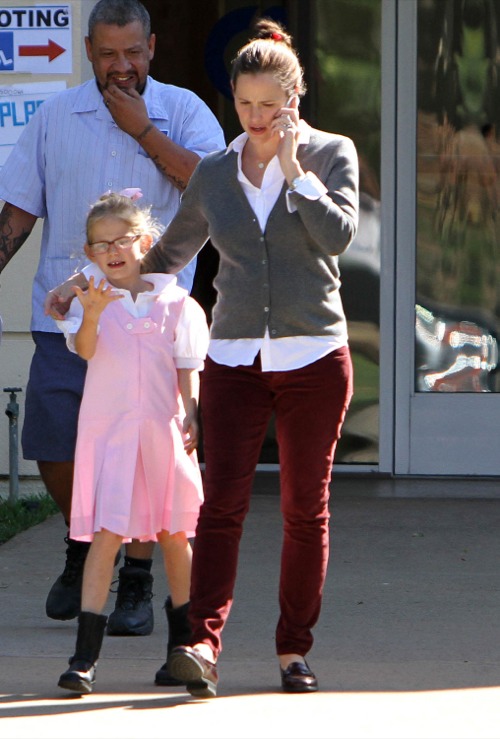 Jennifer Garner was spotted picking up her daughter Violet up from school in Santa Monica, CA on Tuesday. The Butter actress wore a white blouse under a grey sweater with red jeans and flats while talking on the phone.  Violet wore her pink school uniform with black boots as she walked besides her mom.

Garner’s husband Ben Affleck has revealed how they keep the romance in their relationship.

“My wife came out with me to Paris, which was a very big deal. We had a day there and then she flew here to London and we had dinner. So that was two days which was kind of like our first real date night for a long time,” Affleck explained on ITV show Daybreak,
“She was very nervous about being that far away from the kids for that amount of time, but I was saying to her, ‘They are still there, don’t worry.’ We had a very nice romantic trip. We don’t quite do the travelling as a unit yet, there is a little baby and then there is a six-year-old, there is a whole range of kids,” he added.

How do you keep they romance in your relationship?

Khloe Kardashian Is Sure She Will Get Pregnant